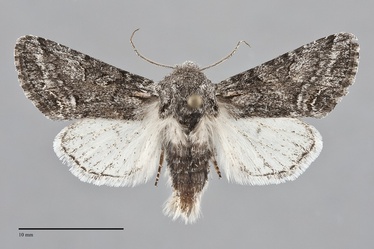 Epidema obscurus is a common, sexually dimorphic, small to medium-sized moth (FW length 12–16 mm) that flies in dry forests and steppe during the fall. It has a mottled, brown-gray, apically elongated forewing with markings that include a yellow and black basal dash, as well as prominent white and black posterior postmedial and subterminal lines. The forewing is powdery brown-gray or gray in males, but more strongly salt-and-pepper gray with less brown in females. The anterior wing base and distal subterminal area are lighter whitish gray and the terminal area is darker gray. A short basal dash is yellow anteriorly and black posteriorly. The antemedial and postmedial lines are gray in males, black adjacent to the median area in females, double filled with the ground color or light whitish gray. The antemedial line is incomplete in males, evident on the costa and on the mid-wing, and usually complete in females, irregular on the veins and excurved with apex at the base of the claviform spot. The median line is gray, very weak, usually evident on the costa and sometimes on the posterior wing. The postmedial line is smooth or weakly scalloped, prominently black and white on the posterior third of the wing, tightly looped around the reniform spot and straight or slightly concave below the spot where it is strongly angled toward the base. The subterminal line is light gray and diffuse on the anterior wing, wider white near the posterior margin, irregular with an offset below the apex and forming a weak W-mark that does not reach the outer margin on M3 and CuA1. It is preceded by a dark gray spot on the costa, small black wedges on the mid-wing, and a black shade on the posterior wing that gradually widens to a spot above the margin. The terminal line is black, often a series of spots. The fringe is weakly checkered gray. The orbicular and reniform spots are partially outlined in black, are filled with light whitish gray peripherally and often with the darker gray ground centrally; both spots are larger and more extensively filled with whitish scales in females. The orbicular spot is an elongate oval filled, sometimes lacking pale scales in males. The reniform spot is kidney-shaped, often poorly defined at the anterior and posterior ends. The hindwing and fringe of males are pure white with a light sprinkling of dark scales, dark gray veins, a weak incomplete postmedial line, and dark terminal line; that of females is powdery brownish gray with a white crescent along the margin that is free of suffusion, with weak postmedial line, dark strong terminal line, and white fringe with a gray-brown base. The head and throax are powdery gray with powdery black margins on the posterior tegulae. The male antenna is moderately bipectinate.

This species and its only synonym were described from the Pacific Northwest. The type locality of Epidemas obscurus Smith is Washington, Pullman. The synonym Epidemas melanographa Hampson is described from Canada, [British Columbia], Vancouver Island.

This species is widely distributed in dry, open habitats.  In the Pacific Northwest, it is common in ponderosa pine, juniper, and oak woodlands east of the Cascades as well as on open sagebrush steppe.  It also occurs in spruce-fir forests at high elevations in the Cascades, and in oak woodlands and savanna in southwestern Oregon. It is found in relatively dry forests and grasslands near the Gulf of Georgia.

This moth is found in California and Nevada south of the Northwest region. The range extends east at least as far as western Colorado.

This moth flies during the fall. It first appears in early September on both sides of the Cascades and flies until mid-October. It is nocturnal and comes to lights.