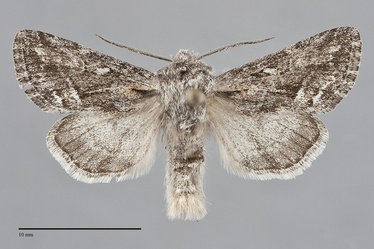 Epidemas cinerea is a small (FW length 12–13 mm), hoary-gray moth that flies in open sage steppe during late fall. It has a thin, black basal forewing dash bordered by ochre yellow, and a light gray hindwing with a broad gray marginal band. The forewing apex is acutely pointed. The ground is hoary light gray with a slight brown tint, slightly darker along the posterior margin and on the distal wing in the subterminal and terminal areas. Females are more mottled than males. The distal fold is pale in the subterminal area, often nearly white. A thin acute black dash extends to the antemedial line and is bordered anteriorly by a patch of ochre yellow. The black claviform spot is long, spanning the medial area, and is often incomplete so that the remaining portion becomes a black line between the ante- and postmedial lines. The transverse lines are gray, double, but usually incomplete and indistinct. The medial component of the posterior postmedial line is usually black, contrasting with whitish filling of this portion of this line. The basal line is a gray smudge on the costa, while the antemedial line is smoothly convex toward the outer margin. The median line is obsolete. The postmedial line originates on the costa anterior to the reniform spot and is sharply bent toward the outer margin near the costa, bends sharply medially about half way between its origin and the apex, and runs obliquely toward the base to the posterior margin. The subterminal line is nearly white, broad, irregular, and indistinct. It is preceded and followed by a series of indistinct dark gray or black spots that are strongest opposite the reniform spot and near the posterior margin. The terminal line is dark gray or black, interrupted on the veins. The fringe is gray, indistinctly checkered with pale or dark gray in some specimens. The orbicular and reniform spots are weakly outlined in gray and filled with light gray, usually most evident due to the filling. The orbicular spot is an elongate oval, often darkest at the posterior medial margin and usually filled with with lighter gray than the reniform spot. The reniform spot is broadly kidney shaped, usually evident as the medial dark outline and a pale smudge. The long claviform spot mentioned previously is filled with the ground color, paler gray, or ochre. The hindwing is dirty light gray suffused with slightly darker gray. Darker smudged discal spot, postmedial line, and even width marginal band are present, and there is a darker thin terminal line. The hindwing fringe is nearly white and often has a complete or incomplete inner gray line. The head and thorax are covered densely with gray scales, often with slightly darker line parallel to the edges of the tegulae. The male antenna is bipectinate and that of the female is filiform.

This species can be distinguished from Epidemas obscurus, usually a slightly larger moth, by the color and pattern of the hindwing. The hindwing of E. obscurus males is pure white with a dark gray discal spot and terminal line; that of E. cinerea is dirty light gray with a dark marginal band. Females of E. obscurus have a light gray hindwing, but it lacks the marginal band of E. cinerea. In general, E. cinerea is browner than E. obscurus, has a less distinct forewing pattern, and a longer basal dash. Epidemas cinerea could potentially be confused with several fall-flying Euxoa species, including E. cinereopallidus. Most Euxoa species, including the species that resemble E. cinerea, have a frontal tubercle that can be observed under magnification. They also lack a distinct basal dash.

Epidemas cinerea occurs in south-central British Columbia and in the dry interior steppe regions of the Columbia Basin, south-eastern Oregon, and southern Idaho.

The range of this moth extends south to southern California near the Pacific Coast. It also occurs on the western Great Plains as far north as south-central Alberta.

Adults fly during late fall, usually during September and October. They are nocturnal and are attracted to light.