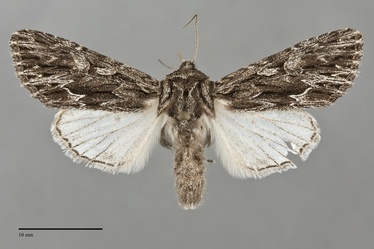 Fishia nigrescens is a medium-size to large moth (FW length 18–20 mm) that flies in sage steppe in Oregon during late fall. It has a dark, charcoal-gray forewing with zigzag lines and a hindwing that is white in males and gray in females. The forewing is relatively long with a slightly pointed apex. It is mottled dark charcoal gray, darkest in the posterior medial area. A black thin basal line is present, and there are thicker black bars in the fold across the medial area and in the cell distal to the reniform spot. The basal and antemedial lines are dark gray, double, with lighter gray filling. The basal line is only present on costa and near the cell. The antemedial line is strongly dentate, with sharp teeth on the posterior wing. The median line is dark gray, faint, limited to near the costa. The postmedial line forms two spots on the costa, is obsolete near the reniform spot, and serrate on the mid-wing with a strong black and white tooth toward the base in the fold. The subterminal line is pale gray, incomplete, evident mostly as pale spots on the mid-wing and a sharp W-mark to the outer margin on M3 and CuA1. It is preceded by several long black wedges on the mid-wing. The terminal line is a series of black wedges. The fringe is dark gray, checkered with light gray at the tips of the veins. The orbicular and reniform spots are outlined by a thin black line. The orbicular spot is a long oval, filled with light gray and a central darker line. The reniform spot is moderately large, C-shaped with posterior limb extending farthest laterally, filled with light gray and a darker line medially and inferiorly. The claviform spot is black, largely obscured by the dark adjacent ground color. The hindwing is white with a sheen in males; medium-dark gray in females, with darker veins, faint discal spot, and black terminal line. The hindwing fringe matches the ground color in both sexes. The head and thorax are hoary dark gray with black lines across the collar and near the edges of the tegulae. The abdomen is gray. The male antenna is biserrate and the female antenna is simple.

This moth can be identified by its large size, nearly black forewing lacking any warm colors, southern Oregon distribution, and late fall flight period. It is most similar to Fishia yosemitae, a common widespread moth, and Fishia connecta, a rare species from southern Oregon and Idaho. Fishia yosemitae is light gray, not charcoal, while F. connecta has a red-brown tint on the medial area of the forewing and a pale-filled rounded orbicular spot unlike F. nigrescens. Platypolia loda, another fall-flying dark gray moth, is also similar to F. nigrescens. It has more complete transverse lines that are less strongly zigzagged than those of F. nigrescens and its orbicular and reniform spots are rounder and filled with lighter gray. Males of P. loda have a pale hindwing, but it is light gray rather than white as in F. nigrescens.

The larva is green with a white lateral band.

This moth flies in sage steppe habitats, including in open juniper forest.

Fishia nigrescens has been collected in central and southern Oregon in the Pacific Northwest.

The range of this species extends south through the Great Basin, where there are records from Nevada and eastern California, to Arizona.

The larva has been reared on rabbitbrush (Ericameria nauseosa, Asteraceae). The caterpillar was collected in May, pupated in June, and the adult emerged in late September of the same year.

This moth flies late during the year, typically in late September and October. It is nocturnal and comes to light.