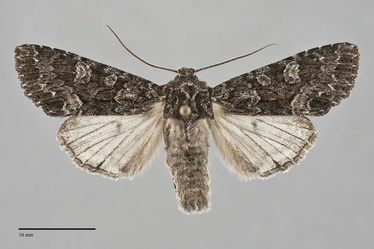 Platypolia loda is a medium-sized to large, dark-gray moth (FW length 18–21 mm) that flies in dry forests during the fall. It has lighter gray filling of the forewing spots and lower subterminal area. The hindwings are white in males and darker in females. The forewing outer margin is slightly scalloped. It is powdery charcoal gray, slightly darker in the median and terminal areas. The palest area is in medial subterminal area in the fold, not highly contrasting. A short black basal dash is present and there is a black bar across the median area in the fold. The basal and antemedial lines are dark gray and black filled with medium gray. The antemedial line is excurved, toothed basad on the veins. The median line is black, diffuse, evident on the costa. The postmedial line has black inner and medium-gray outer components, light whitish gray in the fold; is strongly toothed toward the outer margin on the veins and towards the base in the fold; drawn toward the base on the costa, bent basad at the level of the anterior cell, and is curved toward the posterior margin or slightly outward in the fold. The subterminal line is pale gray, very thin, serrate, with a weak W-mark on M3 and CuA1. It is preceded by a series of black chevrons posterior to M2 that are strongest near the W-mark. The terminal line is black, thin or a series of flat triangles. The fringe is dark gray. All three spots are outlined by thin black lines. The orbicular spot is moderate-sized, round or slightly ovoid, filled with medium gray and usually a dark ocellus. The reniform spot is moderate to large, broadly kidney-shaped, filled with medium gray and a thin whitish central crescent. The claviform spot is moderately large, fused to the median bar. The hindwing is light whitish gray in males, medium-gray in females, with ill-defined submarginal band and discal spot and a thin dark terminal line. The hindwing fringe is white to gray with a darker base. The head and thorax are charcoal gray with hoary lighter edge on the collar and tegulae. The male antenna is bipectinate.

This species can be recognized by its charcoal gray forewing with relatively dark filling of the lines and spots compared to our other Platypolia species. Males are most easily recognized by their pale hindwings. Females of P. loda can be difficult to distinguish from dark specimens of Platypolia contadina, a species that usually has more extensive white filling of the lines and spots. In P. loda the reniform spot is filled with medium-dark gray with a light central crescent, while in dark P. contandina at most the peripheral spot is light-colored. Platypolia loda males resemble Mniotype pallescens, a moth that flies earlier in the summer. In addition to the flight dates these species can be separated by a much paler subterminal area in M. pallescens and a presence of a faint postmedial line on the hindwing in this species that P. loda lacks. Papestra invalida is an earlier summer species that resembles females of P. loda. It has a smooth postmedial line in the fold that lacks the tooth toward the base of P. loda. In addition, its eyes are covered by fine hairs like those of other members of the tribe Hadenini.

This species is widely distributed in drier forests of western North America.  In the Pacific Northwest, it is frequent in open ponderosa pine forests east of the Cascades. In the Siskiyou region of southwestern Oregon, it occurs in oak woodlands at low elevations and in mixed hardwood-conifer forests at middle elevations.

Platypolia loda has been collected most frequently in the eastern part of the Northwest, from southeastern British Columbia, northern Idaho, and the Blue Mountains of Washington and Oregon. It has been found less frequently along the east slope of the Cascades and in south-central British Columbia. It is also infrequent west of the Cascades on Vancouver Island and in southwestern Oregon. The type locality is Seattle, Washington, but we are not aware of other records from Seattle or nearby suggesting that the type specimen might have been mislabeled.

This species occurs in western North America. It has been collected in western Montana and northern and central California outside of the Northwest region.

This species is probably a generalist feeding on many kinds of woody plants.  Records include Douglas fir (Pseudotsuga menziesii) in the Pinaceae and currants (Ribes spp.) in the Grossulariaceae.

The adults are on the wing during late fall, at the earliest in early September and flying through October. This species is nocturnal and comes to lights.