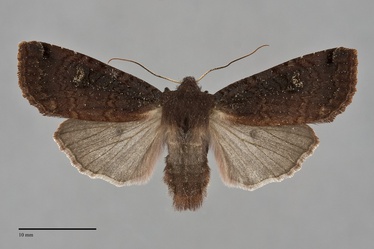 Homoglaea dives is a glossy dark brown, medium-sized moth (FW length 18–20 mm) that flies on both sides of the Cascades during late fall and early spring. It has a black bar on the distal costa, variable light scaling in the reniform spot, and inconspicuous other markings. The outer margin of the forewing is slightly scalloped, especially posteriorly. It is blackish brown anteriorly fading to slightly reddish dark brown on the posterior wing. Fresh fall specimens are glossy, fading slightly to a sheen over the winter. The transverse lines are dark brown, double with lighter brown filling. The basal and terminal lines are inconspicuous. The antemedial line is finely waved, weakly slanted and excurved toward the outer margin. The median line is dark brown, thin and waved, strongest anteriorly. The postmedial line similar to the antemedial line, weakly curved around the reniform spot and then nearly perpendicular to the posterior margin. The subterminal line is pale, weak, slightly irregular. It is preceded by black rectangular bar on the costa, sometimes a few additional small diffuse black spots elsewhere, and a thin dark brown shade. The fringe is concolorous with the terminal area. The orbicular and reniform spots are outlined in dark brown. The orbicular spot varies in shape from a circle to a large oval that touches the reniform spot and is filled with the ground color or brown-gray. The reniform spot is weakly hourglass-shaped, filled like the orbicular spot and often with a sprinkling of light ochre scales. No claviform spot is evident. The hindwing including the fringe is medium-dark gray with a slight reddish tint, with darker gray discal spot, veins, and thin terminal line. The head and thorax are even dark reddish brown. The male antenna is biserrate with a cream base (scape) and proximal dorsum.

This moth can usually be distinguished from other late fall and spring moths by its glossy black-brown and dark red-brown color, inconspicuous markings, and the black bar on the costa. The most similar species, Homoglaea carbonaria, is superficially similar but differs in being dull gray-brown. Other differences between them are slight and inconsistent: the black costal bar of H. carbonaria is divided into smaller anterior and posterior spots, its forewing lines are more distinct, its pale orbicular spot is smaller and rounder, and its apex is rounder than in H. dives.

This species is moderately common in moist forest and riparian habitats along creeks and rivers at low to middle elevations on both sides of the Cascades. It also occurs in higher elevation quaking aspen forests east of the Cascades.

This species is found throughout much of California to the south of our region. It has also been recorded from southern Arizona.

This species is a foodplant specialist that feeds on willows (Salix spp.) and cottonwoods (Populus spp.) in the Salicaceae, including both black cottonwood (P. trichocarpa) and quaking aspen (P. tremuloides).

The adults of H. dives emerge in the fall and fly briefly prior to hibernation. They emerge to mate and lay eggs in the early spring, flying as late as May. They are nocturnal and can be collected at lights.