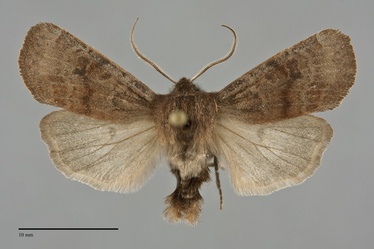 Homoglaea hircina is a small to medium-sized moth (FW length 14–16 mm) that flies in central British Columbia during the early spring. It has a glossy brown forewing marked with smooth pale lines and spots. The forewing has a round apex and outer margin and is nearly uniform glossy warm brown in color. The filling of the brown transverse lines, outlines of the spots, the subterminal line, and distal veins are light brown, while the median line is dark brown. The antemedial and postmedial lines are smooth, excurved across the wing and around the reniform, respectively. The orbicular spot is a small circle or oval. The reniform spot is an upright oval or hourglass-shape, often partially obscure. No claviform spot is evident. The subterminal line is slightly irregular and is preceded by a few ill-defined black spots near the anterior margin. No terminal line is evident at the base of the homogeneous light brown to concolorous fringe. The hindwing is medium-dark brownish gray with darker gray discal spot, veins, and margin. The hindwing fringe is light gray, sometimes slightly pink-tinted. The head and body area mouse-gray. The male antenna is biserrate.

This species can be recognized by its late fall or early spring flight season, relatively small size, glossy brown color, and smooth pale lines.  Homoglaea californica reaches southern British Columbia. It is dull gray-brown rather than glossy and has a more irregular antemedial line that bulges lateral at the posterior margin, unlike the smooth excurved one of H. hircina. Homoglaea carbonaria is also similar to H. hircina and the limits of their ranges overlap slightly. It is larger and has a finely toothed postmedial line.

This species is widely distributed across Canada in moist forests with quaking aspen.

Homoglaea hircina has been found in central and southeastern British Columbia and barely enters the region defined as the Pacific Northwest.

The range of this species extends east to the Atlantic in a relatively narrow band from central Alberta to the northern United States and southern Canada through the Great Lakes region.

This species is a foodplant specialist feeding on quaking aspen (Populus tremuloides) in the Salicaceae, preferring the catkins.

Adults of this species eclose in late fall but do not fly commonly until the spring. Most records of this species are from the early spring, often before the snow has melted completely. They fly at night and come to lights.