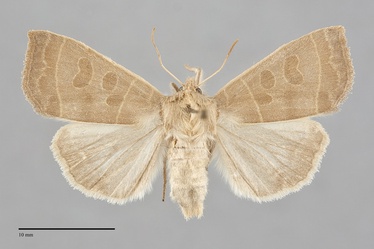 Ipimorpha pleonectusa is an uncommonly collected, medium-size moth (FW length 15–16 mm) that flies east of the Cascades during August. It has an olive-gray, broadly truncate forewing with pale straight lines and large spots. The wing has a slightly hooked tip and a bulging outer margin on the posterior wing. The color is smooth light to medium-dark olive-gray, slightly darker lateral to the postmedial line. The basal, antemedial, and postmedial lines are slightly darker than the ground color, double filled with contrasting light ochre. The lines are nearly straight, with slight undulation of the antemedial line and slight convexity of the postmedial line. A faint dark median line is present. The subterminal line is paler than the filling of the other lines, complete across the wing and moderately irregular in course. The fringe is similar in color to the terminal area without a terminal line. The claviform, orbicular, and reniform spots are outlined by thin pale yellow and are filled with a slightly darker shade of the ground color. All of these spots are large, with the ballooned claviform spot touching the lower orbicular spot. The hindwing is pale to medium-dark brown-gray with very faint discal spot and postmedial line in some specimens. The hindwing fringe is light brown-gray with a yellowish base. The head and thorax match the forewing color, with a slight median ridge on the anterior thorax. The male antenna is filiform.

This species can be identified by its short stout wing-shape, the olive-gray color, and yellow straight lines and large spots. It is most similar to Ipimorpha viridipallida, but it is paler yellow-green and has a white hindwing.

This species is common and widely distributed across Canada in moist forest and riparian habitats.  It is mostly restricted to quaking aspen forests in the Rocky Mountain region of the Pacific Northwest.

Ipimorpha pleonectusa is uncommon in the Northwest, with scattered records from southern British Columbia, central Washington, and southeastern Idaho.

The range of this species extends across North America to the Atlantic Coast. The northern limit is southern Canada, furthest north in central Alberta. The southern limit is Virginia along the East Coast, Oklahoma on the Great Plains, and southern California in the West. Relatively few records are shown for the west on the Moth Photographers Group web site suggesting that it is rare in this region.

This species is a foodplant specialist feeding on willows (Salix spp.) and cottonwoods (Populus spp.) in the Salicaceae, with a preference for feeding on quaking aspen (P. tremuloides).

Adults are on the wing in late summer, typically during August. They are nocturnal and come to lights.