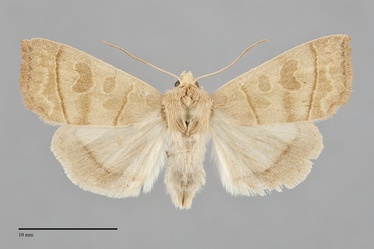 Ipimorpha nanaimo is a medium-size moth (FW length 14 -17 mm) that flies west of the Cascades during late summer. It has a broad, truncate forewing with slightly olive-tinted orange-yellow color, nearly straight lines, and large spots. The wing has a slightly hooked tip and a convex posterior outer margin portion. The color is an odd light orange-yellow, appearing slightly dirty due to an olive cast that is strongest near the apical outer margin. The subterminal area is slightly darker than the terminal area. The basal line is barely evident. The antemedial and postmedial lines are similar, dark orange to orange-gray adjacent to the median area and light yellow outside of the median area. The antemedial line is slightly undulating and slightly angled toward the anal angle. The postmedial line is slightly excurved across the wing or S-shaped with an excurved anterior segment and a concave posterior portion. A faint dark median line is evident posterior to the reniform spot. The subterminal line is pale yellow, usually faint, moderately irregular. Faint gray dots form the terminal line in some specimens. The fringe is light orange-yellow. The claviform, orbicular, and reniform spots are large, outlined by faint dark orange, double filled with more conspicuous light yellow. The spot are filled internally with a dark shade of the olive-tinted ground color. The orbicular spot is round and the reniform spot is hourglass-shaped, sometimes kidney-shaped. The claviform spot is paler than the other spots, almost touching the orbicular spot. The hindwing is pale yellow, sometimes with light gray suffusion, with a diffuse orange-brown to gray postmedial line that fades at the anterior and inner margins. The fringe is the ground color without a terminal line. The head and thorax match the forewing color, with a slight median ridge on the anterior thorax. The male antenna is filiform.

This species can be recognized in its West Coast distribution by its light orange color, smooth bicolored antemedial and postmedial lines, and large dark-filled forewing spots. It is most similar to Ipimorpha viridipallida, an east-side species. It is paler than I. nanaimo, usually with a slight green tint, and has a paler hindwing that lacks a postmedial line. Ipimorpha pleonectusa, another species that occurs east of the Cascades, is similar but darker olive-gray rather than predominantly orange in color. It also has gray hindwings without a strong postmedial line. Cosmia calami, an oak-feeding moth, is similar in size and color as I. nanaimo. It has a more strongly angled antemedial line than I. nanaimo, lacks a claviform spot, has smaller orbicular and reniform spots, and lacks a line on the hindwing.

This species replaces I. pleonectusa and I. viridipallida west of the Cascades in moist forests and riparian zones along rivers and creeks at low elevations.  It is usually rare or uncommon, but may be locally common along rivers with cottonwoods.

Ipimopha nanaimo is found west of the Cascade Mountains from southern Oregon to west-central British Columbia.

This species is found in the West Coast states. It is found in western California as far south as the vicinity of Los Angeles.

No information is presently available regarding larval foodplants of this species, but it is probably a foodplant specialist feeding on willows (Salix spp.) and cottonwoods (Populus spp.) in the Salicaceae like closely related species.  Black cottonwood (P. trichocarpa) may be the preferred larval foodplant.

Adults fly during the summer and have been collected from late June to early September in our region. They are most commonly found in late July and August. This species is nocturnal and comes to lights.