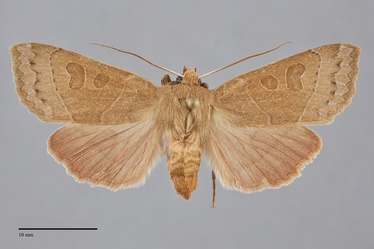 Mesogona subcuprea is a moderate to large noctuid (FW length 18–21 mm) that flies in the western parts of our region during the fall. Its hindwings are shiny and copper-colored, and its broad forewings are uniform, dull, and golden-brown with scalloped margins, and often have a slight suffusion of gray scales that spares the veins. The basal, antemedial, and postmedial lines are similar, smooth, and comprised of continuous yellow-tan and gray interrupted components, with the gray portion of the antemedial and postmedial lines abutting the median area. The antemedial line is strongly angled toward the outer margin and is convex near the wing margins and concave on the mid-forewing. The postmedial line is nearly straight across the wing lateral to the reniform spot and is bent toward the base below the costa and on vein CuA1. The subterminal line is light, similar to the light component of the other lines, slightly irregular with a slight offset below the costa. It is preceded by gray wedges between the veins and a slightly larger triangular spot on the costa. The orbicular and reniform spots are similar, large and pale with slightly darker gray filling. The orbicular spot is a slanted oval. The reniform spot is kidney-shaped. The hindwing is copper-colored, sometimes with a faint gray discal spot and postmedial line but lacking significant gray suffusion. The head and thorax are uniformly of the forewing ground color. The male antennae is beadlike, nearly filiform. A rare form of this species has dark pink forewings (illustrated above).

This species can be recognized by its yellowish forewing with smooth lines and large spots in combination with a copper hindwing. It is most likely to be confused with Mesogona olivata, a more variable species with which it flies. It can have similar forewing color, although usually browner, and has a nearly identical pattern. The dorsal hindwing of this species is heavily suffused with gray, unlike that of M. subcuprea. The rare dark pink form of M. subcuprea resembles Mesogona rubra, a species with which occurs at some locations in western Oregon. It has a darker red rather than coppery hindwing. Its postmedial line is gently convex without the "squared-off" portion that is present in M. subcuprea and has less gray color on the forewing lines and spots.

This species is narrowly endemic to oak forests and oak woodlands along the West Coast from southern Washington to southern California.  It is particularly common in dry oak savanna and oak woodlands at low to middle elevations in the Siskiyou region of southwestern Oregon, and in oak woodlands along the east slope of the Cascades.  However, it is usually rare in the wetter oak forests of the Willamette Valley in western Oregon.  This species is considered to be management sensitive, depending on oaks as larval foodplants. It occurs in open shrub habitats along the east slope of the Cascades in Washington and British Columbia north of the range of Garry Oak.

Mesogona subcuprea is found in western Oregon in the Siskiyou Mountains and Willamette Valley. In Washington it occurs along the east slope of the Cascades and Columbia River Gorge and is not found west of the Cascade Mountains. The range extends north to the southern Okanagan in British Columbia.

This species is found throughout California to near the Mexico border west of the Sierra Nevada crest.

This species is a foodplant specialist feeding on oaks (Quercus spp.) in the Fagaceae in Oregon.  In the Pacific Northwest, the primary larval foodplant is Oregon white oak (Q. garryana). The foodplant in Washington and British Columbia north of the range of oaks is unknown.

This species flies in the fall from late August through September. It is nocturnal and comes to lights. It has also been collected at bait consisting of fermenting fruit in Kittitas County, Washington.