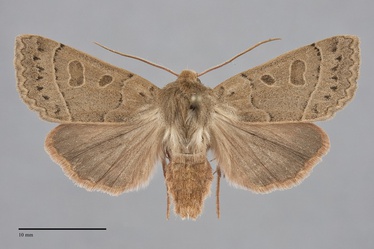 Mesogona olivata is a common, broad-winged medium-sized noctuid moth (FW length 15–19 mm) that flies in a variety of habitats during the fall. It has variably colored gray-brown, red-brown, or light yellow-brown forewings with a simple pattern of smooth lines and spots and a scalloped margin. The forewing ground color is a uniform shade of brown, most often gray-brown without or with a slight reddish tint, but bright red-brown, orange-brown, and light pinkish brown colors are often encountered. In general, populations from sage steppe are lighter than those for wetter forested regions. The antemedial and postmedial lines are similar, smooth, with an interrupted dark gray component adjacent to the median area and a lighter continuous component outside of the median area. The antemedial line is gently undulating, angled toward the outer margin. The postmedial line is broadly arched toward the outer margin, most strongly curved on the anterior wing. The subterminal line is light, slightly uneven, and is preceded by a dark gray spots or wedges that are evident even in light-colored specimens. The orbicular and reniform spots are similar, outlined in pale tan with a thin dark inner component in dark specimens, and filled with the ground color or slightly darker gray. The hindwings is pink-tinted brown-gray, lightly to strongly suffused with gray depending on the darkness of the moth, with a light reddish fringe. The head and thorax are uniformly of the ground color. The male antennae is bead-like to weakly serrate.

This species can be identified by its even tan, pink, or red-brown color, smooth lines and pale spots, and complete row of dark wedges in the subterminal area. It is similar to Mesogona subcuprea and Mesogona rubra which have a more limited distributions in the western parts of the Northwest. Both of these species have shinier and more colorful hindwings without strong gray suffusion, unlike M. olivata, which has gray hindwings even in the palest forms. Mesogona olivata also resembles several other fall-flying moths with similar color and pattern, including Abagrotis erratica and Dichagyris variabilis. Neither of these species have a series of dark spots preceding the subterminal line.

Forbes (1954) states that the range of Epiglaea apiata, an eastern North American moth, extends to British Columbia based on material in the Canadian National Collection (CNC), Ottawa. A British Columbia specimen identified as E. apiata at the CNC is actually M. olivata (Lars Crabo unpublished).

Mesogona olivata is common and widespread in a variety of habitats in the Pacific Northwest. It is especially common in the foothills along the east slope of the Cascades, but also occurs in sage steppe. The distribution is more limited west of the mountains. In Washington it is found in dry forest in the Puget Trough and Gulf of Georgia. It is more widespread in western Oregon. It has been collected in the southeast corner of Idaho suggesting that it is probably more widespread in that state and in western Montana than our data suggests.

This species is widespread in western North America as far north as southern Canada. It occurs from the Pacific Coast to Texas and Wyoming.

This species is a foodplant generalist feeding on many kinds of hardwoods.  It particularly favors Oregon white oak (Quercus garryana) in the Fagaceae west of the Cascades, and bitterbrush (Purshia tridentata) in the Rosaceae east of the Cascades.  Other common foodplants include snowbrush (Ceanothus spp.) in the Rhamnaceae, currents (Ribes spp.) in the Grossulariaceae, and various other Rosaceae.

Mesogona olivata flies in late summer and fall, beginning in mid-August and ending in October. Most specimens have been collected in September. It is nocturnal and comes to lights. This species is attracted to sugar baits and have been collected at bait comprised of fermenting fruit in eastern Washington.