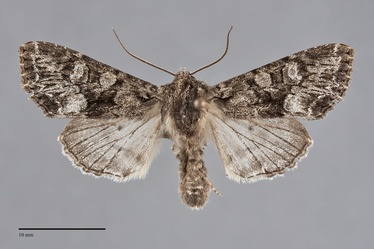 Mniotype pallescens is a medium-sized moth (FW length 16–18 mm) that flies in mountain forests during the summer. It has a dark gray forewing with whitish gray reniform spot and subterminal area, black basal and median dashes, and whitish hindwings. The forewing has a slightly elongated apex and slightly scalloped outer margin. It is powdery dark gray with a slight brown tint, darker in the median and terminal areas. The subterminal area is palest gray, whitish near the posterior margin. A short black basal dash is present and there is a diffuse black bar across the median area in the fold. The basal and antemedial lines are dark gray and black filled with the ground color. The antemedial line is excurved, focally pulled toward the base on 1A+2A. The median line is black, diffuse, and faint. The postmedial line is black, strongly toothed on the veins, drawn toward the base on the costa, narrowly curved around the anterior cell, and then strongly angled toward the base below the reniform spot and curved toward the posterior margin through the fold so that the median area is much wider anteriorly than posteriorly. The subterminal line is white, diffuse, irregular with an offset below the apex and with a moderate W-mark to the margin on M3 and CuA1. It is preceded by a series of powdery to sharply-defined long black chevrons surrounded by a gray shade near the W-mark. The terminal line is a series of black triangles. The fringe is checkered dark gray. All three spots are outlined by thin black lines. The orbicular spot is moderate-sized, round, filled with medium gray and a punctate ocellus. The reniform spot is moderate-sized, broadly kidney-shaped, outlined by black medially and faint gray elsewhere, filled with medium gray medially and lighter gray centrally and laterally. The claviform spot is moderately large, fused to the median bar. The hindwing is light whitish gray with dark gray markings: veins and terminal line, dark gray small discal spot, and diffuse postmedial line and submarginal band. The hindwing fringe is white with a gray base. The head and thorax are dark gray with thin dark lines near the edges of the collar and tegulae. The male antenna is biserrate.

This species, as the name suggests, is paler than our other Mniotype species. It is also less brown, especially compared to Mniotype tenera. Mniotype pallescens is most similar to Mniotype ducta. The antemedial and subterminal areas of M. pallescens are lighter whitish gray than those of M. ducta. The hindwing of M. pallescens is also lighter with less gray suffusion in the marginal area. Males of Platypolia loda, a late fall moth with dark gray forewings and light hindwings, resembles M. pallescens. These species can be sorted by collection dates along. The forewing of M. pallescens is more mottled with light gray than that of P. loda, a charcoal gray moth, and lacks a strong inward tooth of the postmedial line in the fold which is a feature of our gray Platypolia species.

This species is rare and sporadic in higher elevation coniferous forests east of the Cascades.  In Oregon, it has only been found in mixed pine and fir forests of the Warner Mountains in Lake County.

This species has been found at several widely separate localities in the Northwest. These include the Coast Range and Purcell Mountains of British Columbia, the east slope of the Cascades in Washington, and the Warner Mountains of south-central Oregon.

This species was described from Arizona. It has also been collected in central Utah.

No information is presently available regarding larval foodplants of this species, but it probably feeds on hardwoods based upon closely related species.

This species flies during the summer, usually during July. It is nocturnal and comes to lights.