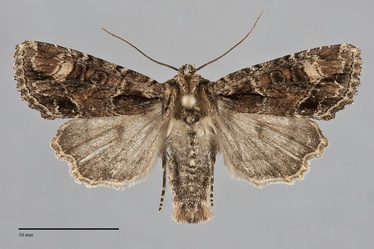 Paraseptis adnixa is a common, small to medium-sized brown moth (FW length 14–17 mm; Wingspan: 34.9 ± 1.3 mm (n = 25; range 32–37.5 mm)) that flies in forests during the summer. It has a mottled brown forewing with a long black basal dash and an ochre "false reniform" spot distal to the true reniform spot. The outer margin of the forewing is weakly scalloped, and the hindwing has a concave notch in the outer margin posterior to vein M1. The forewing is mottled warm brown to gray-brown, with slightly darker red-brown to gray-brown medial to the median area and darker gray in the terminal area. The median area distal to the reniform spot is light to slightly orange-tinted ochre, producing a “false” reniform spot. The subterminal area is orange-brown to red-brown with black streaks near M2 and a black bar or diffuse spot in the fold, both of which are adjacent to similar dark areas in the terminal area. A long black basal dash extends to the antemedial line and is forked slightly at the basal line. The basal, antemedial, and postmedial lines are dark gray or black, double filled with tan. The antemedial line is excurved, slightly irregular on the veins, and strongly incurved at the posterior margin. The median line is gray, usually faint, excurved through the reniform spot. The postmedial line is weakly scalloped, slightly concave toward the base lateral to the reniform, bent sharply 90° on M2 at the "false reniform spot," and angled toward the base distal to this bend. The subterminal line is ochre or tan, irregular with a weak W-mark on M3 and CuA1, preceded and followed by the black spots described above. The terminal line is black, variable, solid, or broken into spots. The fringe is gray-brown with a tan base and weakly checkering. The three spots are partially outlined in black. The orbicular spot is round to oval, often incomplete, filled with the ground color and variable gray to black central ocellus. The reniform spot is hourglass-shaped, filled with the ground color and a dark line centrally. The claviform spot is small to moderate-sized. The hindwing is dirty brownish gray with a darker gray margin except between veins M1 and M3. The veins are darker, especially on the anterior wing, as are the discal spot, postmedial line, and terminal line. The hindwing fringe is whitish with a two-toned ochre and dark gray base. The head and thorax are brown speckled with black, weakly banded across the collar and near the edges of the tegulae. The male antenna is beaded.

This species can be identified by the combination of a mottled brown forewing, pale "false reniform spot," and a long black basal dash. Aseptis binotata is similar and is the only other moth that has a similar pale patch distal to the true reniform spot. It is smoother brown, lacks black in the posterior subterminal area, and lacks a long basal dash.

Paraseptis adnixa occurs from the Cascade Mountains to the Pacific Coast as far north as Vancouver Island. It is also found east of the Cascade and Coast Range Mountains but is not as widespread there; it has been found in southwestern British Columbia near Lillooet, eastern Washington and the adjacent Idaho Panhandle, and Oregon in the Blue Mountains and near the Klamath River.

This is a West Coast species. It occurs throughout California and in Baja California, Mexico.

This species is a foodplant specialist feeding on Indian plum (Oemleria cerasiformis) and cherries (Prunus spp.) in the Rosaceae.

The flight season of P. adnixa is summer, peaking in late June and July. Adults fly at night and come to lights..