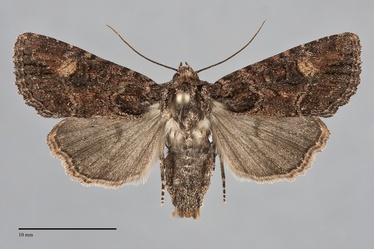 Aseptis binotata is a common, small to medium-sized brown moth (FW length 14–16 mm; Wingspan 32.5 ± 1.3 mm (n = 25; range 29.5–35 mm)) that flies in a variety of habitats during the summer. It has an ochre "false reniform" spot distal to the true reniform spot. The hindwing has a concave notch in the outer margin posterior to vein M1 that is typical for the genus Aseptis. The forewing is warm, dark brown to paler gray-tan, nearly uniform in dark specimens. Some light specimens are more mottled while others are "washed out" without contrasting markings. Powdery black suffusion is evident medial to the antemedial line near the posterior margins in lighter individuals. A cream, ochre, or light orange “false” reniform spot is present in the median area distal to the true spot, crossing the postmedial line into the medial subterminal area. A few dark scales are present at the base of the cubital veins without a conspicuous dash. The basal, antemedial, and postmedial lines are dark gray or brown, double filled with a light shade of the ground color. The antemedial line is undulating, slightly slanted toward the outer margin and excurved. The median line is gray, usually only evident near the costa. The postmedial line is weakly scalloped, slightly concave toward the base lateral to the reniform, bent sharply 90° on M2 in the "false reniform spot," and angled and slightly concave toward the base distal to this bend. The subterminal line is pale ochre, very weak, preceded by black wedges on the mid-wing and followed by black lines opposite the cell. A row of black spots comprises the terminal line. The fringe is weakly checkered brown. The three spots are outlined in black. The orbicular spot is round, often open at the anterior and posterior ends, filled with brown or purplish gray. The reniform spot is kidney-shaped or weakly hourglass-shaped, filled similar to the orbicular spot. The claviform spot is small to moderate-sized. The hindwing is brownish gray with a slightly darker margin, a radiating pattern of dark veins, very faint postmedial line, discal spot, and a thin dark terminal line. The hindwing fringe is whitish with a two-toned ochre and dark gray base. The head and thorax are powdery and match the forewing color. The male antenna is weakly beaded, nearly filiform.

This species can be distinguished from all other brown Pacific Northwest moths except Paraseptis adnixa by the "false" ochre reniform spot lateral to the true spot. All other similar species have pale filling inside the spot, not beside it. Aseptis binotata lacks a black basal dash which is present in P. adnixa.

This moth was described by Walker from the Northwest, as were two of its synonyms. The type locality of Mamestra binotata Walker is Vancouver Island. This is also the type locality of Hadena extersa Walker and Miana rubiginosa Walker.

Larva is smooth, green with contrasting red and white lateral stripes.  It is illustrated by Miller and Hammond (2003).

This species is common to abundant in all types of forest habitats throughout much of western North America.  In the Pacific Northwest, these habitats include coastal rainforests, oak woodlands, mixed hardwood forests, and riparian forests at low elevations west of the Cascades, and mixed hardwood-conifer or ponderosa pine forests at middle to high elevations in the Siskiyou, Cascade, and Rocky Mountains. It is also found in shrub steppe, most commonly in riparian areas.

Aseptis binotata is widespread in the Northwest, occurring on both sides of the Cascades as far north as Vancouver Island near the coast and south-central British Columbia inland. The range extends east to southeastern British Columbia, western Montana, and Wyoming. This species is least common in extreme southeastern Oregon and southern Idaho where it has a spotty distribution in isolated mountains.

This species is widespread in California as far south as San Diego County. It is most common near the Pacific Coast but has been collected in the Rocky Mountain region from southern Alberta to Colorado. It was originally described from Mendocino County, California.

This species is a very broad generalist feeding on all types of hardwoods including the families Aceraceae, Betulaceae, Fagaceae, Rosaceae, Ericaceae, Rhamnaceae, Cornaceae, Caprifoliaceae, Grossulariaceae, and Salicaceae.

The flight period of A. binotata is the summer, beginning in early June and lasting until August. Most specimens have been collected during July. It is nocturnal and comes to lights.