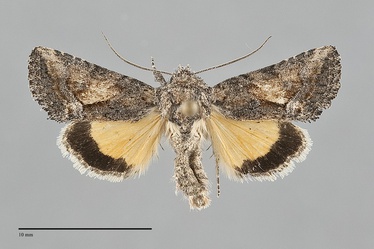 Pseudanarta caeca is a very small moth (FW length 8–10 mm) that flies in steppe habitats during late summer and fall. It has a gray forewing with yellow-tan central median area, and a black-banded, bright yellow hindwing. The forewing is dull slightly bluish gray, yellow-tan in the mid-median area, in the anterior subterminal area, and at the apex. The posterior subterminal area is whitish gray. A black or brown bar extends across the median area in the fold. A very short basal dash is present in a few specimens. The antemedial line is black at the base of the median dash, mostly evident elsewhere as the undulating transition from the gray base to the tan median area. The median line is gray, diffuse, limited to the costa. The postmedial line blends with the blue-gray costa anteriorly and is black medially and blue-gray laterally, filled with light tan, weakly S-shaped with a convex lateral segment lateral to the reniform spot and a concave medial segment in the fold. The subterminal line is pale tan, preceded by a brown shade posterior to the level of the cell. The terminal line is dark. The fringe is weakly checkered gray. The orbicular and reniform spots are pale tan, obscure. The orbicular spot is a small oval filled with darker tan and the reniform spot is darker, barely evident. The claviform spot is not evident. The hindwing is yellow with a well-defined black marginal band. The hindwing fringe is white with a dark gray base. The head and thorax are bluish medium gray. The male antenna is beaded.

This small moth can be identified by the combination of its bright yellow and black hindwing and the yellow-tan area on the mid-median area that contrasts with the darker gray surrounding areas. Pseudanarta flava has dark brown on this portion of the wing, and also has a convex segment of the postmedial line near the lower margin of the cell that is a lacking in P. caeca. Pseudanarta crocea has whitish forewing spots, much unlike the inconspicuous spots of P. caeca.

This species is widely distributed throughout much of western North America on open, dry prairies and sagebrush steppe at low elevations.  In the Pacific Northwest, it appears to be more restricted to relatively undisturbed sagebrush steppe and juniper woodlands east of the Cascades, but may be frequent in this habitat.

Pseudanarta caeca is found east of the Cascades as far north as the Okanogan River Valley in north-central Washington. It is also found in southeastern Oregon, southern Idaho, and southwestern Montana.

The range of this moth extends south through eastern and southern California to the border with Mexico. The range extends east into Arizona and New Mexico.

No information is presently available regarding larval foodplants of this species, but it may be a specialist feeding on native bunchgrasses (Poaceae) based upon closely related species.

The flight season of P. caeca is late summer and fall, typically a little earlier than P. crocea. It begins in early August and last until November. It is nocturnal and comes to lights.