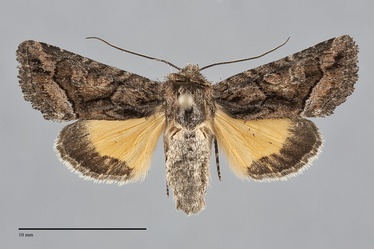 Pseudanarta singula is a small moth (FW length 11–12 mm) that flies in rocky desert canyon in southeastern Oregon during late summer and fall. It has a dark brown forewing with black lines, median bar, and subapical spot, and a black-banded bright yellow hindwing. The forewing has a pointed apex and is dark brown, slightly grayer in the terminal area. Diffuse black basal and median dashes are present, and there is black suffusion on the posterior margin near the base. Two ill-defined black marks are present beneath the apex in the subterminal and terminal areas. The basal and antemedial lines are thin black, double filled with the ground color. The basal line is evident on the costa. The antemedial line is excurved, irregular on the veins with a tooth toward the base in the fold. The median line is black, weak, limited to the costa. The postmedial line is even, has a black inner component and an outer component that is brown anteriorly and light gray posteriorly, widening slightly toward the posterior margin. It is drawn toward the base on the costa, is straight across the wing lateral to the reniform spot, and oblique toward the base on the mid-wing. The subterminal line is obscure, slightly powdery gray on the posterior wing. The terminal line is black. The fringe is dark gray-brown. The orbicular and reniform spots are partially weakly outlined by dark and are filled with a light shade of gray-brown. The orbicular spot is oval and the reniform spot is weakly hourglass-shaped. The claviform spot is not evident. The hindwing is bright yellow with a well-defined black marginal band. The hindwing fringe is white with a ochre and dark gray base. The head and thorax are dark brown. The male antenna is beaded.

Pseudanarta singula is the least common and most limited in distribution of our four Pseudanarta species. It can be recognized by its dark brown forewing with a black median dash and black spots in the anterior terminal area in combination with a yellow and black hindwing. The most similar species, Pseudanarta flava, has a prominent white outer component to the postmedial line, thinner and darker in P. singula, and a black rather than brown terminal area. Small brown fall-flying Sympistis species such as Sympistis mirificalis have much better-defined forewing spots than P. singula, or are more mottled without black components to the lines like Sympistis hayesi.

This species is local and uncommon in basalt canyons in steppe regions.

Pseudanarta singula has been found in northern Malheur County and southern Harney County in southeastern Oregon.

This moth is found predominantly in the Basin and Range and desert Southwest. Outside of the Northwest it has been recorded from eastern and southern California, and Baja California, Mexico near the Pacific. It is found in the Four Corner States and the adjacent parts of western Texas and Oklahoma.

No information is presently available regarding larval foodplants of this species, but it might be a specialist feeding on native bunchgrasses based upon closely related species.

The flight period of P. singula is the fall. It has been collected during late August and September in Oregon. It is nocturnal and comes to lights.