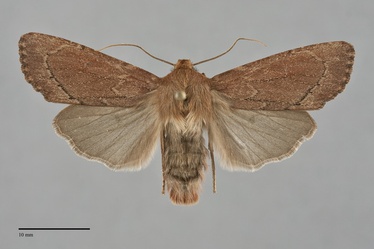 Ufeus hulstii is a smooth red-brown large moth (FW length 20 - 21 mm) that flies above mid-elevation during the summer. It has forewing markings limited to light and dark gray antemedial and postmedial lines. The forewing color is even with a gloss when fresh. The antemedial and postmedial lines are similar, dark gray adjacent to the median area and light gray outside the median area. The antemedial line is irregular, zig-zagged near the trailing margin. The postmedial line is smoothly convex toward the outer margin, smooth with short teeth on the veins. No other markings are present. The hindwing is smoky gray with slightly darker discal spot. The head and thorax match the forewing color. The male antenna is bead-like.

This species is most similar in appearance to Ufeus satyricus, a sexually dimorphic species with small males and large females that flies in late fall and early spring. These species can usually be separated by collection dates alone. In addition, U. hulstii lacks the longitudinal black streak found in the cell in U. satyricus females. Males of U. satyricus are smaller than those of U. hulstii and have a black basal dash and a thin black line near the margin opposite the cell.

This species is most commonly collected on dry ridges at middle to high elevations along the east slope of the Cascade Range.

This species has been collected in Washington and Oregon in our region. It is found on ridges in the Cascade Range and in the Blue Mountains. Specimens with summer dates from low-elevations west of the mountains might be reared specimens of U. satyricus rather than this species.

No certain information is presently available regarding larval foodplants of this species.  Crumb (1956) reported Salicaceae as foodplants, but these larvae were probably mis-identifications of U. satyricus.

This species flies in mid-summer, unlike Ufeus satyricus which emerges in the fall and overwinters until spring. Most records from our region are from July and August.