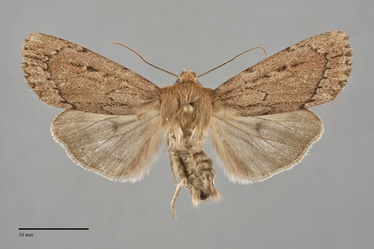 Ufeus satyricus is a smooth red-brown to brown moth that flies throughout our region in late fall and early spring. The medium-sized (FW length 16–18 mm) males have nearly unmarked forewings, and the larger females (FW length 18–21 mm) have black forewing lines and a streak through the cell. The ground color of both sexes is smooth medium-dark to dark red-brown, lightly glossy in fresh specimens. The transverse lines are faint, gray, more evident in females. Males are have a thin black basal dash and a similar black line across the terminal area between veins M1 and M2. Females are more extensively marked, with variable black in the cell and distal wing that can be limited to the cell, extend from the wing base to the reniform spot, from the end of the cell to the outer margin, or from the base to the outer margin. Additional black spots are present near the outer margin. The antemedial line is absent or gray, zigzagged on the veins. The postmedial line is darker gray than the other lines, toothed on the veins, broadly arched across the distal wing. The fringe is weakly checkered light brown and brown. The orbicular and reniform spots are evident due to surrounding black in females and are absent in males. The hindwing in males is smooth sooty gray, while that of the female is light brown-gray with darker discal spot and veins. The head and thorax match the wing in both sexes. The male antenna is bead-like.

This species is only likely to be confused with Ufeus hulstii, a similar smooth red-brown moth. Ufeus hulstii flies in the summer in the mountains, not in the late fall or early spring like U. satyricus, and has markings limited to dark antemedial and postmedial lines in both sexes. Ufeus hulstii is less sexually dimorphic than U. satyricus with similar males and females.

The populations of this species are arranged into two subspecies, eastern U. s. satyricus which is more mottled dull brown with similar sexes, and western U. s. sagittarius which is redder and sexually dimorphic. Most of our populations are referable to the western subspecies; however, those from west-central British Columbia are best assigned to the nominate subspecies.

This species is widely distributed throughout much of North America in riparian habitats along rivers and creeks, and in quaking aspen forests of the Rocky Mountain region.  It is relatively common in these habitats throughout the Pacific Northwest.

Ufeus satyricus is found in low-elevation localities throughout our region on both sides of the Cascade Mountains. It occurs at least as far north as Smithers in west-central British Columbia. The range is probably underestimated since it is not commonly collected due to its very late fall and early spring flight seasons.

The range of this species extends east to the Atlantic across boreal Canada. The range in the East extends from Nova Scotia and northern Ontario south to Pennsylvania and Illinois. In the West it is found south of the Pacific Northwest to Colorado, New Mexico, Utah, and southern California.

This species is a foodplant specialist feeding on willows (Salix spp.) and cottonwoods (Populus spp.) in the Salicaceae, including quaking aspen (P. tremuloides).

This species emerges from pupation during the fall and flies for several weeks prior to hibernating. It re-emerges in warm weather in early spring. It is likely that it overwinters prior to mating. This species flew at dusk during very cold fall weather in west-central British Columbia.