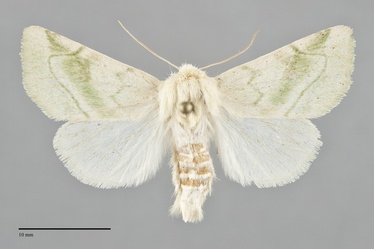 Zotheca tranquilla is a distinctive pale green, rarely tan, medium-size moth (FW length 15–18 mm) that flies in forests and riparian areas during the summer. It has a white hindwing and the only markings on its forewings are the antemedial and postmedial lines and a diagonal dark shade. The apical forewing is slight pointed and the outer margin is strongly convex. The color is typically pale green with darker green on the median area, likely the wide median line, and a similar-color triangular patch in the anterior subterminal area that together give the impression of a continuous shade. Darker specimens also have green suffusion in the basal and terminal areas. Specimens exposed to moisture - and some wild-caught specimens - are tan or light brown rather than green. The antemedial and postmedial lines are similar, slightly darker green or brown than the median shade. The antemedial line is widely and evenly zigzagged across the wing. The postmedial line is smooth, strongly oblique toward the outer margin from the costa to vein M1 where it is bent sharply toward the base; the segments anterior and posterior to the angle are slightly concave inward. The reniform spot is absent or an indistinct dark green or tan kidney-shaped smudge. The fringe is the same color as the terminal area. Other lines and spots are absent. The hindwing is pure white with a satin sheen. The head and thorax match the forewing color. The male antenna is filiform.

Green specimens of this species are unmistakable. The only other green moth of similar size in our area is Chloridea virescens, an occasional pest species in agricultural areas. This moth has several oblique stripes across the wing, a very different pattern from that of Z. tranquilla. Tan specimens of Z. tranquilla could potentially be mistaken for Plagiomimicus spumosum, an uncommon species from aridlands in the southeastern part of our region. The forewing lines of this species are pale and the median area is uniformly darker than the rest of the wing features, unlike those of Z. tranquilla.

The larva is smooth, with a complicated pattern of middorsal yellow circles bordered with black, a subdorsal pale purple band, and a broad yellow lateral band mottled with small black spots.  It is illustrated by Miller and Hammond (2003).

This species flies in moist forest and riparian habitats.  In the Pacific Northwest, it is very common in coastal rainforests and mixed hardwood forests at low elevations west of the Cascades, and in mixed hardwood-conifer forests at higher elevations in the Coast Range and Cascades.  East of the Cascades, it is more restricted to riparian zones along creeks and rivers in the Rocky Mountain region and low-elevation deserts.

Zotheca tranquilla is widely distributed in the Pacific Northwest as far north as southern British Columbia and as far east as central Idaho. The range includes wet forests west of the Cascades north to Vancouver Island.

This is a West Coast moth. It is widespread in California as far south as the border with Mexico and has also been recorded from Nevada.

This species is a foodplant specialist feeding on elderberries (Sambucus spp.) in the Caprifoliaceae.

The flight season of Z. tranquilla is the summer. Specimens from our region have been collected from early June through September, with a peak in July. It is nocturnal and comes to lights.