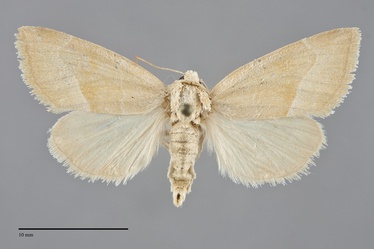 Plagiomimicus spumosum is a smooth gray-tan to yellow-brown, medium-sized moth (FW length 15 - 17 mm) that flies in dry steppe habitats during the summer. It has a pointed forewing with a dark median area separated from the light whitish gray subterminal area by a smooth postmedial line. The forewing is acute with a slight hook-shape to the apex is some specimens. The color is smooth, slightly darker in the median area than at the base and lightest whitish gray in the medial portion of the subterminal area. The terminal area is similar to the base. The transverse lines are light whitish gray, smooth and relatively straight. The postmedial line forms a distinctive 90-degree bend and the anterior cell. The subterminal line is slightly irregular, but is faint except near the costal margin. The spots are absent; a pale remnant of the reniform spot can be made out at the postmedial line below the bend in some individuals. The hindwing is pale whitish gray, gradually darkening toward the outer margin, with a brown terminal line and two-toned gray fringe. The head and thorax are similar in color to the wing base. The frons of the head bears a tubercle with a depressed crenulate center. The male antenna is simple.

This species can be identified by its pointed wing shape, smooth tan to yellowish color, and the smooth bent postmedial line that separates the dark median area from the paler subterminal area. The most similar species is Selicanis cinereola, a moth that has only been found in Fremont County, Idaho in the Pacific Northwest. Its forewing lines are very smooth, lacking the characteristic bends of P. spumosum.

This species is common and widely distributed on dry prairies, open disturbed grasslands, and along roadsides throughout most of the central United States.  It may not be native to the Pacific Northwest, but may have spread into this region with the spread of sunflowers along disturbed roadsides, agricultural lands, and in urban areas at low elevations east of the Cascades.

Plagiomimicus spumosum is found in the dry interior steppe of the Northwest. It is most widely distributed in the Columbia Basin but also occurs near the Snake River in eastern Oregon and southern Idaho.

The distribution of P. spumosum is most extensive in the Great Plains region but reaches both coasts. The range extends from central and southern California and the Pacific Northwest north to Alberta and North Dakota, south to southern Texas and northern Florida, and east to South Carolina.

This species is a foodplant specialist feeding on sunflowers (Helianthus spp.) in the Asteraceae.

Adults of this species fly during the summer. They have been collected from early June to early September in the Northwest. This species is nocturnal and comes to lights.

This species has the potential to be a pest in crops of commercial sunflowers.