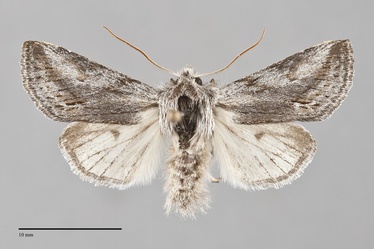 Pleromelloida cinerea is a common, medium-sized moth (FW length 14 - 17 mm) that flies in the fall throughout much of the Northwest. It has a mottled light and medium-dark gray forewing marked with a series of black and white dash-like marks in the posterior subterminal area. The forewing has a pointed apex and smoothly convex outer margin. Its color is steel gray with an oblique diffuse dark gray shade in the subterminal area that narrows and darkens toward the apex. A small amount of brown is present in the lower subterminal area in some specimens. The antemedial and median lines are reduced to oblique dark marks on the costa. The postmedial line forms a similar mark on the costa, is strongly convex toward the outer margin near the costal margin, and forms a thin evenly curved black line that runs obliquely toward the wing base before fading in the cell. The subterminal line is pale gray, very weak near the apex and gradually increasing in prominence on the posterior wing, turning medially to meet the posterior postmedial line in the fold. It is preceded medially by a series of sharply-defined black lines on the anterior wing and longer white anterior and black posterior lines on the posterior wing, longest and thickest in the fold. A series of smaller black spots precede the subterminal line in the terminal area, also gaining in size and strength from the apex to the anal angle. The fringe is similar to the ground color. A small dark smudge represents the reniform spot in some specimens. The other spots are absent. The hindwing is light gray, slightly darker toward the outer margin and in females, with dark gray discal spot, incomplete postmedial line, and veins. The hindwing fringe is whitish gray with a gray base. Several tufts of scales are present on the head, including at the bases of the antennae. The thorax is silvery gray with a black and light gray transverse line across the mid-collar. A weak median tuft is present on the collar, and there are dorsal tufts on several of the abdominal segments. The male antenna is bead-like.

This is the only fall-flying member of the genus. It is most similar to Pleromella opter in the Amphipyrinae, but this species flies in the spring and is easily separated from P. cinerea by collecting date alone. It has a more uniform gray forewing that lacks most markings.

The larva is smooth with a swollen dorsal hump near the tail.  The color is brown with parallel wavy white and brown lines.  It is illustrated by Miller and Hammond (2003).

Pleromelloida cinerea is found throughout the Pacific Northwest as far north as south-central British Columbia. It is less common west of the Cascades in Washington, but is more common in western Oregon. This species is not found in open steppe habitats.  It has been rarely collected in southern Idaho, possibly due to limited sampling during the fall.

Pleromelloida cinerea is found in California south of the Pacific Northwest, reaching the border with Mexico. It is also found in extreme southwestern Alberta.

The flight season of this species is in the fall, beginning in late August and lasting until October. It is nocturnal and comes to lights.