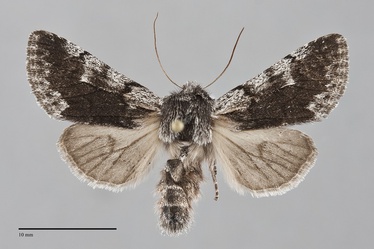 Pleromelloida conserta is a dimorphic, medium-sized (FW length 14 - 17 mm), gray moth that flies in forests throughout the Northwest in the spring. Its prominent, black, antemedial and postmedial forewing lines are fused near the trailing margin. On the forewing, these lines are extensive and black. The forewing has a pointed apex and smoothly curved outer margin. The ground color is powdery medium gray, darkest gray to black along the trailing margin and in the subterminal area preceding the subterminal line. One form of this moth can be found in otherwise normally marked populations (most commonly west of the Cascades) exhibits a jet black central forewing, leaving the costa, base, and terminal area gray. The veins are black with a thin, black basal dash. The antemedial and postmedial lines are black, strongest on the costa but visible across the wing. The anterior antemedial line is zig-zagged near the costa, with the median line smoothly excurved toward the outer margin. A dark median line is usually evident. The subterminal line is pale gray, irregular, and preceded and followed by variable black spots between the veins. No terminal line is evident. The fringe is dark gray. The reniform spot is a small dark gray bar or crescent. The other spots are absent. The hindwing is smoky gray with dark discal spot, veins, and terminal line. The fringe is two-toned, gray basally and light gray to white distally. The head and thorax are hoary gray with black and white transverse bars across the collar. Tufts of long scales are present at the base of the antenna. A weak crest is present on the median collar, and several dorsal tufts are present on the abdominal segments. The male antenna is filiform.

The black form of P. conserta is distinctive and cannot be confused with any other spring-flying moth. The gray form is most likely to be confused with Pleromelloida bonuscula, a smaller species that occurs east of the Cascade Mountains. The forewing lines of P. conserta are complete across the wing, whereas those of P. bonuscula are indistinct on the mid-wing and posterior margin. Pleromelloida conserta is usually larger than P. bonuscula.

Pleromelloida conserta is widely distributed in forests throughout the Pacific Northwest, at least as far north as central interior British Columbia. It occurs in riparian zones of arid areas but is absent from open steppe regions such as the central Columbia Basin.

This species is found along the west Coast from the Pacific Northwest to southern California. East of our region it is known from Alberta and the Rocky Mountain states to Colorado.

The flight period of P. conserta is early spring, beginning in mid-March and lasting until mid-May in our region. It is nocturnal and comes to lights.