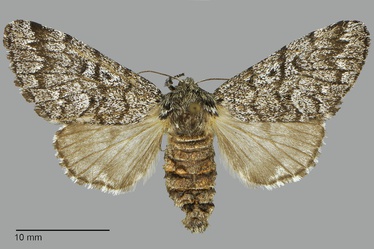 Panthea acronyctoides is a white moth with black transverse lines in most of its range in eastern North America. The western subspecies P. a. nigra is found in central British Columbia and differs in having a salt-and-pepper medium-gray ground color with a nearly equal mixture of black and white scales. It is moderately large (FW length 18 - 21 mm (from the original description)). The antemedial, median, and postmedial lines are similar, single, thick, and black. The antemedial line are undulating. The postmedial line is scalloped between the veins and is followed by a thin white line. The subterminal line is white, markedly irregular, and preceded by a black shade. The fringe is checkered gray and black. The orbicular and reniform spots are small and black. The hindwing is gray with ill-defined darker gray discal spot, submarginal band, and a white and gray checkered fringe.

The North American populations of P. acronyctoides are arranged in two subspecies. The nominate subspecies is eastern, reaching as far west as central Alberta. Most of the specimens that are illustrated on this site are from eastern North America. The western subspecies P. a. nigra is found in central British Columbia and in the Rocky Mountains.

This species is widely distributed in coniferous forests across Canada, extending through the Rocky Mountain region. Habitats include both spruce-fir forests and pine forests.

Panthea acronyctoides is widespread in central British Columbia where it has been found as far south as the vicinity of Kamloops.

This species is found across boreal Canada from northern central British Columbia and northern Alberta to the island of Newfoundland. The southern limits of the range are Maine along the Atlantic Coast and northern Georgia in the Appalachian Mountains. The western subspecies P. a. nigra occurs in the Black Hills and the Rocky Mountains of Colorado and southern Wyoming outside of the Pacific Northwest.

This species is a foodplant specialist feeding on conifers (Pinaceae), but is a generalist feeding on many species of spruces (Picea spp.), firs (Abies spp.), and pines (Pinus spp.). It has been reared from lodgepole pine (Pinus contorta) in British Columbia (Anweiler 2009).

Adults fly from late spring to summer. They have been collected from late May to early August in the Northwest. It is a nocturnal species that comes to lights.