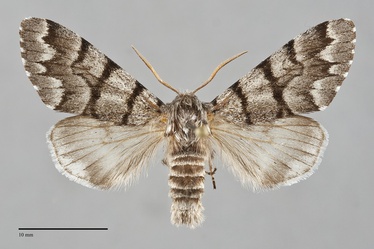 Panthea furcilla is a moderate-sized gray and white moth (FW length 17–20 mm) that occurs in the Peace River District of British Columbia. It has smooth black transverse lines and no forewing spots. The forewing is powdery gray with longitudinal white areas in the cell and in the fold. The transverse lines are thick and black. The antemedial line is sinuous and the median line is thick and straight. The postmedial line is slightly irregular from the costa to vein CuA1, then strongly incurved toward the costa to meet the median line in the fold. The white subterminal line is deeply irregular and is preceded by a dark gray to black shade. The spots are obsolete. The hindwing is white to pale gray with a diffuse gray discal spot and diffuse postmedial and submarginal bands. The hindwing fringe is white. The head and thorax are medium to dark gray. The male antenna is broadly bipectinate.

This species is widely distributed in coniferous forests throughout eastern North America, extending west across Canada to the Rocky Mountains.  It is particularly common in pine forests.

Panthea furcilla has been found in the Peace River District in north-eastern British Columbia. It has not been collected west of the Continental Divide.

The distribution of this species extends to eastern North America across the Prairie Provinces of central Canada. The eastern range extends from central Ontario to Nova Scotia in the north to Missouri, eastern Texas, and Florida in the south (Anweiler 2009). The eastern populations are divided into northern and southern subspecies although intermediates occur between their ranges.

This species is a foodplant specialist feeding on conifers (Pinaceae), and particularly seems to favor pines (Pinus spp.).