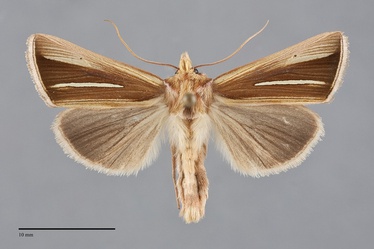 Plusia venusta is a very distinctive medium-sized moth (FW length 15 mm) that flies in eastern British Columbia, coastal Washington, and south-central Oregon during the summer. It has a long gold stigma on the distal two-thirds of the forewing. The forewing is triangular in shape with nearly straight margins. The ground color  is golden brown, lighter slightly pink buff anterior to the cell and along the trailing margin. The veins are slightly darker, and a thin dark stripe is present in each interspace to produce a finely streaked appearance. Two longitudinal light gold stigmas bordered by darker scales are present, the longest and most prominent on the mid- and distal portion of the lower third of the wing and the other oblique to the wing on the outer half of the anterior third. The basal half of the costa and entire trailing margin are also metallic gold. A black dot is present at the anterior distal cell. A pink buff terminal line is present except near the anal angle. All other transverse lines and spots are absent. The fringe is pinkish tan. The hindwing is gray with a slight pink tint, with gray veins and a slight pink terminal line and a pink-buff fringe. The head and thorax are pale buff with slightly darker brown along the anterior tegulae. The male antenna is weakly bead-like.

This moth is unmistakable due to the combination of pink buff and golden brown color and long golden stigmas.

This species is widely distributed across Canada in open marsh habitats around lakes.  A large disjunct population is isolated at Klamath Marsh at middle elevations on the east slope of the Cascades in Klamath County, Oregon.

This species has a disjunct distribution in our area. It is found in southeastern British Columbia, on the coast in Pacific County, Washington, and in Klamath County in south-central Oregon. The odd distribution in Washington and Oregon suggests that this moth might be more widely distributed than these records suggest.

This species is found across North America in a relatively narrow north-south distribution near the Canada-United States border. The range extends north to the Northwest Territories through Alberta. The Washington and Oregon populations of Plusia venusta are geographically separated from the more continuous North American populations of this species that occur from southwestern British Columbia to the East Coast.

No information is presently available regarding larval foodplants of this species, but it probably feeds on marsh sedges (Carex spp.) in the Cyperaceae and grasses (Poaceae) like related species.

This species has a single generation in the summer, with records from the Northwest in July and August. It is nocturnal and comes to lights.