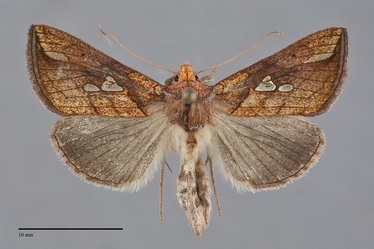 Plusia putnami is an attractive small to medium-sized moth (FW length 14 - 16 mm) that flies in the eastern part of the Pacific Northwest during the summer. It has several shiny gold stigmas on a bright orange-brown forewing. The forewing color is warm orange-brown, slightly purplish along the costa. The base of the costa, apex, and posterior wing distal to the antemedial line are lighter and brighter orange-brown with a finely speckled appearance due to  scattered darker scales. Two golden stigmas are present on the mid-median area. Both are broad, sideways teardrop-shaped, with the basal stigma roughly twice as large as the distal one. The anterior portion of the basal stigma extends into the adjacent cell as a thin spot above the cubital vein. An additional parallelogram-shaped stigma is located near the apex, with shiny gold between it and the apex. The lines are dark orange-brown. The basal, antemedial, median, and postmedial lines are similar, oblique toward the outer margin on the costa, bent basad near the cell, then straight and parallel to each other across the wing angled toward the base. All of the lines are faint anteriorly and clearly evident on the posterior wing. The subterminal line is similar but smoothly waved rather than straight. A thin dark orange-brown terminal line is present at the base of the dark purplish gray-brown fringe. A black dot is present at the anterior end of the cell. The hindwing is gray-brown with slightly darker veins and a pink-tinted gray fringe. The head and thorax are bright-orange brown to the collar, darker purplish brown posteriorly. The male antenna is filiform.

This species and Plusia nichollae, its westerly counterpart, are closely similar in superficial appearance but differ in details of the male genitalia. The larger basal stigma extends above the cubital vein where it is an oblong spot in the lower cell in P. putnami. This stigma rarely extends into the cell in P. nichollae and the portion that does is smaller and rounder than that of P. putnami. The forewing color of these species is subtly different, most evident when the two species are compared side-by-side. The posterior median area of P. putnami is powdery orange-brown while that of P. nichollae is smoother and shiny golden-brown.

Larva is smooth with only two pairs of abdominal prolegs.  The color is green with thin white dorsal lines and a broad white lateral band.  It is illustrated by Lafontaine & Poole (1991).

This species is common and widely distributed in wet prairies, bogs, and marshes, including wetlands along creeks and rivers.

Plusia putnami is a predominantly eastern and northern North American species that reaches the southwestern limit of its range in the Northwest. It occurs in southeastern British Columbia, northern Idaho, and the eastern portions of Washington and Oregon. It occurs in the Columbia Basin in Washington and the Blue Mountains in Oregon.

This species has a large range in North America. It is found across the northern Continent from Alaska to Labrador. The southern limit is Pennsylvania and the Great Lakes states in the East. The range extends south in the Rocky Mountains to Colorado and Utah. A record for northern California near Oregon is shown in Lafontaine & Poole (1991).

This species is a foodplant specialist feeding on sedges (Cyperaceae) and grasses (Poaceae) in wetland habitats.

The flight period of P. putnami is summer. It has been collected most commonly in June and July in our area. It is nocturnal and comes to lights.