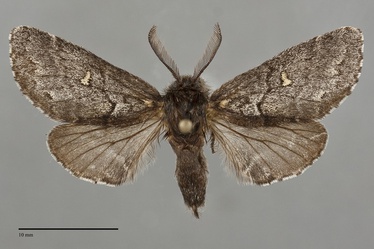 Gluphisia avimacula is a medium-sized (FW length 16–18 mm), dark gray moth that flies in southern British Columbia during the spring. It has a crisply-demarcated black-rimmed light yellow reniform spot.  The forewing has a slightly elongated apex and a rounded anal angle.  The ground color is hoary dull dark gray, with variable amounts of yellow-green to olive at the posterior wing base, in the posterior median area, and in the distal subterminal area.  Occasional specimens from eastern North America are lighter gray with contrasting wide bands of blackish gray basal to the antemedial line and in the median area, but no such forms have been collected in the Northwest.  A pale yellow spot is present at the base of the wing. The lines are dark gray to black. The basal line is very irregular with a quadrate segment toward the outer margin posterior to the cubital vein.  The antemedial line is the darkest line, becoming gradually darker and thicker toward the trailing margin, oriented straight across the wing and weakly zigzagged between the veins with an angle apex toward the base in the fold.  The postmedial line is oriented obliquely from anterolateral to posteromedial, scalloped toward the outer margin between the veins. The subterminal line is slightly irregular, faint and diffuse, pale gray with variable dark gray outer component.  The fringe is similar in color to the terminal wing, sometimes weakly checkered with light gray.  The discal spot is sharply outline in black with uniform light yellow filling.  It is variable in shape, usually concave toward the outer margin with a thinner upper half, often with a projection toward the base of the wing along the cubital vein.  There are no other spots.  The hindwing is slightly translucent dark gray with light and dark scales near the anal angle forming a short segment of the postmedial line.  The hindwing fringe is gray and weakly checkered on the mid-wing and at the anal angle.  The head and body are dark brown-gray.  The male antenna is widely bipectinate.

This species is most similar to Gluphisia severa, a common and widespread species in our region, and resembles a small and dull gray form of it.  The reniform spot of G. severa is bar-like rather than wider toward the posterior with an extension toward the base as in G. avimacula, and less crisply outlined.  When visible, the antemedial line of G. severa is even in width across most of the wing with a thicker spot on the trailing margin and is bent focally, apex lateral, on the cubital vein.  That of G. avimacula thickens gradually toward the posterior wing and is straight, smoothly curved, or barely angled at the lower cell.

The larva is smooth, slender, and bluish-gray, with a very thin yellow stripe along each side and many small yellow spots. It is depicted by Miller et al. (2018).

This species is widely distributed in boreal forests with quaking aspen across Canada.  The specimens from south-central British Columbia were collected in an aspen (Populus tremuloides, Salicaceae) grove.

Gluphisia avimacula is a predominantly eastern species that has been found a few times in southern British Columbia.  The eastern records are from the southern Columbia Trench (including Ft. Steele (Chris Schmidt, personal communication 2011)) and the western limit of its known range is the southern Cariboo Region near 70 Mile House.

This range of this moth extends east to the Atlantic Coast where it if found from New Brunswick and central Quebec to West Virginia and southern Ohio.  Isolated records extend west across the parkland of the central Canadian Prairie Provinces.  Gluphisia avimacula also occurs in Colorado.

The foodplant of this species is not known.  The most likely host is quaking aspen (Populus tremuloides, Salicaceae) based on the foodplants of closely related species and habitat association in British Columbia.

The flight period of G. avimacula is during spring.  The British Columbia specimens were collected in early June, but it is likely that they also fly earlier during May.  They are nocturnal and come to lights.  The adults do not feed.