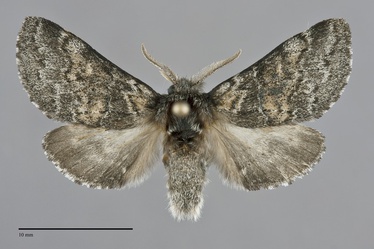 Gluphisia septentrionis is a small to medium-sized moth (FW length 13–15 mm) that flies in forests throughout the Northwest from late spring until fall. It has variable mottled gray forewings banded with ochre to light olive forewings and lacking well-defined spots.  The forewings are fairly broad and stubby without scalloping or flanges.  They are powdery ash gray with variable ochre to olive basal and median areas, often heavily dusted with gray.  The gray uneven basal, antemedial, postmedial, and subterminal lines are usually visible, especially the antemedial and postmedial lines which are darkest gray, while the spots are obsolete. Variable numbers of raised glossy scales on the basal and median forewing can often be seen with the naked eye and appear like grit on emery cloth.  The hindwing is dull gray, darkest toward the margin.  The body is hoary medium gray to dark gray.  The antennae are bipectinate, broadly in males and weakly in females.

This species can usually be identified as a prominent by its broad antennae and as this species by its small size, mottled and banded gray and olive forewing that lacks spots.  It is our only small member of the Notodontidae with gray and yellow to olive forewing color.  Gluphisia severa is similar but significantly larger.  They also differ in having lines on the hindwing, at least at the anal angle.  Gluphisia septentrionis weakly resembles dark specimens of the noctuid moth Brachylomia populi but the antennae of Gluphisia are wider and the elements of the wing pattern are quite different, including the presence of a typical kidney-shaped reniform spot in B. populi.

Populations of this species from northeastern Nevada are small and have a broad pale olive median area.

The larva is smooth, slender, and green, and may have a pair of thin yellow stripes (one along each side, toward the top) or it may have a single wide yellow stripe along the midline that contains large purple spots. It is depicted by Miller et al. (2018).

This species is fairly common in both moist forest and riparian habitats throughout the Pacific Northwest, including coastal rainforests, mixed hardwood forests west of the Cascades, high elevation montane conifer forests, and along rivers and creeks at low elevations east of the Cascades.

This species is widely distributed in Pacific Northwest forests.  It is least common in arid steppe habitats but occurs in areas with aspen and cottonwoods (Populus spp.).

Adults have a long flight period and might be multiple-brooded in our area.  Pacific Northwest records are from early May through August.  It is nocturnal and comes readily to light.  As with other prominents the adults do not feed.