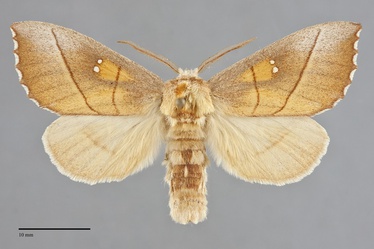 Nadata gibbosa is a common, large (FW length 22–27 mm), yellow and brown moth with the discal spot represented by two shiny white dots.  This species is widely distributed in forests throughout our region and flies during late spring and summer.  The lateral forewing has a sawtooth pattern, each notch filled with pale fringe.  The color is powdery tan with yellow areas in the cell, on the posterior half of the forewing, and along the lines.  The antemedial and postmedial lines are thin, brown, and smooth.  The antemedial line is weakly excurved, and the postmedial line is strongly oblique toward the base, straight except for an incurved segment at the posterior margin.  White spots mark the anterior and posterior distal cell.  The hindwing is light yellow to yellow-brown with a faint brown postmedial line and lack significant dark scaling along the veins.  The thorax is light yellow brown with a large anterior tuft of loose scales.  The male antennna is broadly bipectinate; that of the female is simple.

This species can usually be identified by the smooth yellow and tan forewing with two silvery spots at the end of the cell.  The only similar species, Nadata oregonensis, which is restricted to areas with oaks, is hoary red-brown with dark veins on both wings.  Datana californica is somewhat similar in size, color, and markings but lacks that spots at the end of the cell and has a dark contrasting thorax.

The larva is smooth and green with a thin yellow mid-dorsal line and covered in tiny yellow speckles.  It is illustrated by Miller & Hammond (2003) and Miller et al. (2018).

Nadata gibbosa is found in forests throughout the Pacific Northwest as far north as the Peace River region of northeastern British Columbia.  It does not occur in steppe habitats but is found in the larger mountains of southern Oregon and Idaho.

This species has a large range in North America.  In the East it occurs from Nova Scotia to Florida.  The western range includes the southern Rocky Mountains and California outside the Pacific Northwest.

This species is a generalist feeding on many hardwood trees and shrubs, particularly in the families Fagaceae, Betulaceae, Aceraceae, and Rosaceae.

Adults appear to be single brooded in our region, although Forbes (1948) mentions that some populations have a partial second brood.  The Pacific Northwest records are from mid-May to early August.  This species is nocturnal and comes readily to lights.  Like other prominent moths the adults do not feed.