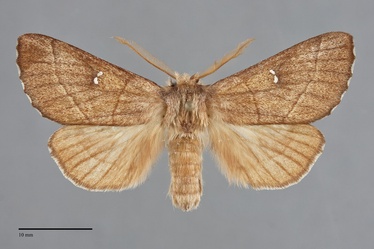 This oak-feeding species resembles its common and widespread congener Nadata gibbosa, but both fore- and hindwings are darker and hoarier red-brown with dark veins.  It is slightly smaller (FW length 18–26 mm).  As in N. gibbosa, the forewing margin is scalloped, only the antemedial and postmedial lines are present, and the reniform spot is comprised of two silvery white dots.  The fringes of both wings are white with a tan base.  The thorax is similar in color to the forewings and bears a loose tuft of scales on the anterior portion.  The male antenna is broadly bipectinate, while that of the female is simple.

Nadata oregonensis can be identified by its association with oaks, the powdery tan or reddish brown color, dark veins on both wings, and two white spots at the end of the cell.  It is only likely to be confused with N. gibbosa. As noted above, these species differ in color and N. gibbosa lacks dark veins, especially evident on comparison of the hindwings.  The postmedial line of N. oregonensis is more curved than that of N. gibbosa. Datana californica is generally similar in color and pattern, although it lacks white spots at the end of the cell and has a velvety red-brown spot on the thorax that is lacking in Nadata.

This species is only found in areas with oaks (Quercus spp.).  It is broadly distributed in western Oregon, but appear to be restricted to a small region along the eastern Cascades in Washington near the Columbia River.  It has not been found elsewhere in western Washington nor on Vancouver Island.

This species is restricted to California outside the Pacific Northwest.

This species is a foodplant specialist feeding on deciduous oaks (Quercus spp.) in the Fagaceae, and primarily uses Oregon white oak (Q. garryana) in western Oregon.

Adults have been collected from mid-May through early August.  Most records are from the early summer.  The adults are nocturnal and come readily to light.  Like other prominent moths they do not feed as adults.