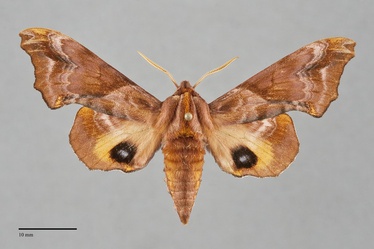 The yellow hindwing color differentiates this species from all other Pacific Northwest sphinx moths with hindwing eyespots. This moth is unlikely to be confused with any other species.

This species is relatively common and widely distributed east of the Cascades in riparian habitats along creeks and rivers at lower elevations, and in mixed hardwood-conifer forests at higher elevations in the mountains.  A population in central Oregon is found in mixed juniper-hardwood woodland at middle elevations.

Paonias myops occurs widely in the Pacific Northwest east of the crest of the Cascade Range.  It is found from south-central British Columbia to southern Oregon and Idaho, most commonly in mountain foothills.  It is absent from the driest steppe habitats, although it has been collected in some of the mountains in the Basin and Range province of southern Oregon.  It is found in the mountains of southeastern Idaho.

The range of this species is similar to that of Paonias excaecatus in the United States and Canada. It is more widespread in the intermountain west but does not occur along the immediate Pacific Coast. Its western range extends to the Mexico border, although it is not found in southern California or most of Texas.

The larvae feed on many hardwoods, particularly various Rosaceae and huckleberries (Vaccinium spp.) in the Ericaceae.  In the Pacific Northwest, cherries (Prunus spp.) and serviceberry (Amelanchier spp.) may be of particular importance.

Adults are on the wing from May to early August. They are nocturnal and come readily to light. Members of the genus Paonias do not feed as adults.