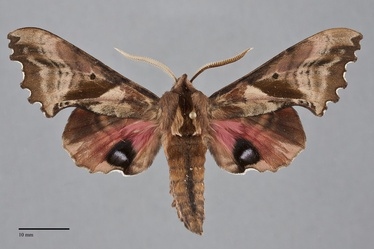 Paonias excaecatus, the Blind Eyed Sphinx, is a large to very large moth (FW length 28–39 mm) with strongly mottled warm brown forewings with deeply scalloped outer margins and dark pink and brown hindwings bearing black and blue eyespots. The forewing is long and appears curved distally because of a convex distal costal margin and concave distal trailing margin. The outer margin is strongly and slightly unevenly scalloped, accentuated by the fringe which is white in the concave segments. The base, anterior median area, and terminal area are darkest brown. The central median area is darkest and richest brown, separated from the trailing margin by a nearly longitudinal line. Several ill-defined dark marks are present on the subapical distal wing. The lines other than the compound postmedial line are fairly inconspicuous. The discal spot is a black dot. The hindwing is brown with dark pink or red centrally and at the base. Its margin is weakly scalloped. The large black eyespot near the anal angle has a central blue area that lacks a black ocellus (pupil). The body is brown with a median darker brown stripe on the thorax. The antenna is club-like.

This species can be identified by its large size, brown forewing with scalloped outer margin, and pink hindwing with a black and blue eyespot. It can be told from brown forms of Smerinthus cerisyi by the lack of a black ocellus in the blue portion of the hindwing eyespot and from Paonias myops by the red—not yellow—hindwing color.

The larva is granulose green with faint yellow lateral stripes and a caudal horn.  It is illustrated by Miller & Hammond (2003).

This species is common in mixed hardwood forests at low elevations west of the Cascades and in low elevation riparian habitats along creeks and rivers in the northern and eastern parts of its Northwest range.

Paonias excaecatus is found in forests throughout much of the Pacific Northwest, including west of the Cascade Mountains from southwestern British Columbia through Oregon.  The northern limit of its range is in the southern third of British Columbia.  The range extends east to the border with Alberta, then south through the Idaho Panhandle to the Blue Mountains of Washington and northeastern Oregon.  It is absent from the east slope of the Cascades except near the Columbia Gorge, and is not found in the drier interior portions of our region.  It does not occur in most of southern Oregon and southern Idaho.

This species has a wide range in North America north of Mexico. It ranges as far north as Labrador and north-central Alberta. Its western range extends south to northern Arizona and New Mexico in the Rocky Mountain region and northern California along the Pacific Coast.

Adults fly during late spring and summer, with most records from late May through July.  It is single brooded.  This species is nocturnal and comes readily to light.  The adults do not feed.