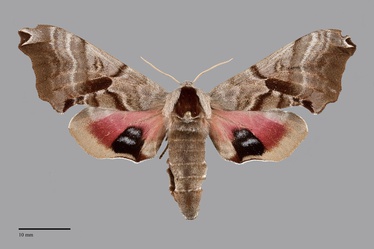 Smerinthus jamaicensis is a large to very large hawkmoth (FW length 25–34 mm) that flies in northern Idaho and British Columbia during late spring and summer. The hindwing has a blue eyespot that is divided in two by black coloring. The forewing is mottled light and dark gray with a complex pattern of light and dark lines and dark brown markings. The most prominent dark markings are a black semicircle bordered medially by white on the outer margin at the apex, an oblique rectangular dark brown bar below the discal spot, and a small black-brown mark near the anal angle. The terminal are is smooth gray-brown. The antmedial line is pale gray bordered laterally by dark brown, strongly excurved with the aforementioned brown bar joined to it at the apex of the curve. The postmedial line is compound with a single whitish gray line and several darker components, undulating. The discal spots is dark brown, incomplete at each end, filled with the adjacent ground color. The hindwing is light to dark rosy pink. The large black eyespot containing two similar size blue marks, one anterior to the other. The head and lateral thorax are light gray with a smooth dark brown central thorax. The antenna is light gray-tan, club-like.

This species can be told from all other sphinx moths with hindwing eyespots by the black and white mark at the apex of the forewing. The two blue spots in the eyespots are usually diagnostic, although they are fused in a minority of individuals.

This species is primarily found in deciduous hardwood forests throughout eastern North America, but extends westward across southern Canada in forest or riparian habitats.

Smerinthus jamaicensis is found in much of British Columbia except in the western part of the province, and has also been collected in northern Idaho.

This species is widely distributed in north America although it is absent from much of the West and most of Florida.  It occurs to the Rocky Mountains in Colorado and the western Dakotas in the Great Plains south of Canada.  The range reaches as far north as Newfoundland and the Great Lakes in the East.  The range extends furthest north in the west, reaching southern Northwest Territory near Alberta and British Columbia.

The larva feeds on a wide diversity of hardwood shrubs and trees, particularly in the families Salicaceae, Rosaceae, and Betulaceae.

The adults are single brooded and fly from late May to July.  Their mouthparts are small and they are not known to feed.  They are nocturnal and come to lights.