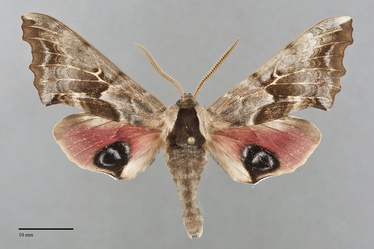 Smerinthus cerisyi is a large to very large moth (FW length 29–39 mm) that flies in central and northeastern British Columbia in our region. Its pink hindwings have a blue eyespot with a central black pupil. The forewing has a strongly scalloped outer margin. The color is various shades of gray and darker gray-brown. It is medium-dark gray from the forewing base to the outer component of the antemedial line and to the apex on and near the costa. The median area posterior to the lower cell is dark gray to brown-gray, as is the subterminal area between the branches of the median vein and the terminal area below the apex. A triangular dark gray or black spot is present at the end of the posterior margin. The cubital vein and its branches and the transverse vein across the distal cell are pale, nearly white, almost to the outer margin. The lateral aspect of the antemedial line is curved through 90° on the mid-forewing, forming a sharp point. The postmedial line has many components which are scalloped on the veins. A powdery white or light blue-gray subterminal line is present. The hindwing is rose pink to red centrally with tan outer and gray anterior and medial margins. It is marked with a prominent eyespot, black at the periphery, bright blue with a large black pupil centrally. The head and median collar are brownish gray, the central thorax is blackish brown, and the tegular are light gray. The antenna is thick, tapering slightly from apex to base.

This species and its close relatively Smerinthus ophthalmica can be distinguished from other Pacific Northwest sphinx moths with hindwing eyespots by the solid round black pupil in the blue portion of the "eye." The central eyespots of other species are either double (Smerinthus jamaicensis) or pale (Paonias species). Smerinthus ophthalmica, an abundant and widespread species throughout most of the Pacific Northwest, is very similar to S. cerisyi. Males of S. cerisyi have wider antennal pectinations and a more strongly scalloped forewing outer margin than those of S. ophthalmica. The forewing is more strongly patterned in S. cerisyi due to more extensive pale veins, more irregular postmedial lines, and the presence of a pale subterminal line. The antmedial line is strongly angled in S. cerisyi, curved in S. ophthalmica. A morph with brown forewings exists in S. ophthalmica whereas all S. cerisyi are gray. Females of these two species cannot be reliably distinguished without DNA sequencing and are best identified when associated with the males.

The relationship of this species to S. ophthalmica was discussed recently by Schmidt & Anweiler (2010) who presented a convincing argument that these taxa are distinct species.  This is discussed further under S. ophthalmica.

The larva is granulose green with yellow subdorsal lines and yellow lateral stripes, and a short caudal horn.

This species flies in boreal forest and aspen parklands.

This species is found found only in central and northern British Columbia and southern Alberta in northwestern North America.  It is replaced by S. ophthalmica in the rest of our region.

Smerinthus cerisyi is a species of the boreal forest zone, extending across the Continent from Alaska, central Yukon Territory, and Northwest Territories to Newfoundland. The range extends south to central Alberta and the western Great Plains, the Great Lakes region, southern Ohio, and Pennsylvania.

This species is single brooded and occur from May through July in British Columbia.  They are nocturnal and come to light.  The mouthparts are reduced and the moths do not feed as adults.