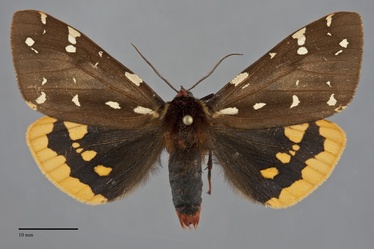 Arctia parthenos, the St. Lawrence Tiger Moth, is a large (FW length 28 - 33 mm), predominantly brown and orange tiger moth found in boreal forests. The forewing is chocolate brown marked with numerous, cream-colored spots. The hindwing is orange with irregular black markings comprised of the fused basal area, discal spot, and median band. Most of the head and thorax are brown like the forewing, but the top of the head and edge of the collar are red-orange and the base of the collar and tegulae at the wing bases are cream. The abdomen is black with dark orange sides and tip. The black antennae are bipectinate in males and simple in females.

This distinctive species is unlikely to be confused with other moths. Arctia virginalis is similar in size and has a black and orange hindwing, but its forewing is black, not brown.

This species is widely distributed across Canada and through the Rocky Mountains extending to the Blue Mountains, but is usually uncommon to rare in riparian habitats and mixed hardwood-conifer forests at middle to high elevations.  However, population explosions may occur locally during cool, wet years as in the Blue Mountains of northeastern Oregon during 1993.

Arctia parthenos occurs throughout most of central and eastern British Columbia, including the far northern portion of the province. It occurs in northern Idaho, northern Washington as far west as the Methow Valley, Okanogan County, and in the Blue Mountains of southeastern Washington and adjacent Oregon.

This species has a wide distribution in boreal North America. It occurs from Alaska to Labrador, even extending above the arctic circle near the Mackenzie River. The range extends south to New Mexico and Arizona in the Rocky Mountains and to North Carolina in the Appalachian Mountains.

This species is a generalist on various foodplants, but particularly favors hardwoods such as willows (Salix spp.), alders (Alnus spp.), and birches (Betula spp.).

Adults are single brooded and have been found from late May until early August, being most common in late June and early July. They are nocturnal in our region and both males and females come to light. They fly during daylight further north with a bobbing flight about two to three meters above the ground.