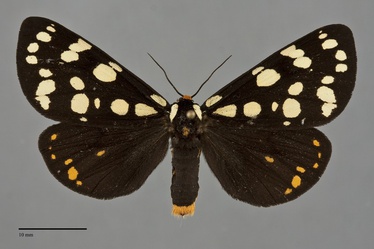 Arctia virginalis, the Ranchmans Tiger Moth, is a large (FW length 26 - 31 mm), heavily spotted, black and orange, day-flying species. The forewing appears black with numerous light yellow spots. The hindwing is orange with broad irregular black bands, one proximal and one distal to the black discal spot, and a patchy marginal band. These are greatly expanded in some individuals, nearly completely covering the orange areas. The head is orange. The thorax is black with a posterior orange spot, and the tegulae and adjacent lateral collar are light yellow. The abdomen is orange with black spots, these being fused in heavily marked individuals. The black antennae are simple in males and females.

This species is similar in size and general appearance to Arctia parthenos, but the forewing color of this species is brown rather than black.

The larva is covered with dense long hairs, orange at the head and tail, black in the central part of the body with very long white hairs.  It is illustrated by Miller & Hammond (2003).

This species is widely distributed at low elevations in western North America, but colonies are often widely disjunct and sporadic.  It is often locally common, and may experience population explosions at the local level.  In western Oregon, it occupies wet lowland prairie, wet meadows, and wet forests of Oregon ash in riparian zones.  East of the Cascades, it typically occurs in wet meadows and riparian zones along creeks in dry desert regions.

This species has a spotty distribution in the Pacific Northwest. It is uncommon west of the Cascades, with records from low elevations near the Gulf of Georgia, including southern Vancouver Island, south Puget Sound, the Willamette Valley, and the Siskiyou Mountains. Numerous records exist for Washington and Oregon near the east end of the Columbia Gorge, but it appears to not be found elsewhere in the Columbia Basin. It occurs in southern British Columbia, Idaho north of the Snake River plain, the Blue Mountains, and near Steens Mountain in southeastern Oregon.

Arctia virginalis is found throughout western North America from south Monterrey Bay, California across Nevada and southern Utah to Colorado, and north to southern British Columbia.

Arctia virginalis is diurnal. Males patrol rapidly and resemble butterflies on the wing. They occur during the summer, most commonly in June and July.