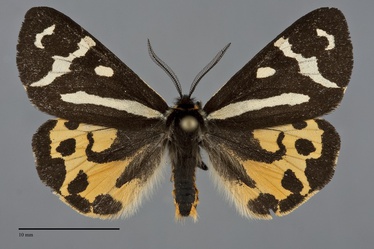 Arctia plantaginis is a familiar day-flying tiger moth found in subalpine meadows. It is medium-sized (FW length 15 - 17 mm). The forewing ground color is light cream, slightly darker in females. The wing is variably marked with black. The dominant marks are a triangular patch in the anterior base that extends distally to the end of the cell but leaves an oval patch of ground color in the cell, a long patch along the posterior margin that is expanded anteriorly at the anal angle, and a triangular patch at the apex. The base of the costa is usually yellow to orange. The hindwing differs in color and markings in males and females. The ground color in males is variable, usually white but occasionally orange, while that of females is orange. Black markings on the male hindwing are lines on the cubital and 2A veins from the base to the end of the cell, the former fused to the black discal spot in heavily marked individuals, and an uneven marginal band. Males with orange hindwings tend to be heavily marked and have a series of black submarginal spots. The markings are more extensive in females. Most specimens have a black base extending as far as the discal spot at the anterior and mid wing level and to the anal margin posteriorly where it is fused to the marginal band, a series of three or four submarginal spots, and an undulating marginal band. The head and antennae are black. The thorax is black with collar black in the midline and orange laterally. The thorax is black with lighter white or orange scales laterally, these matching the hindwing ground color, and a tuft of orange scales at the end. The antennae are bipectinate in males and simple in females.

This species is unlikely to be confused with other moths in our area.

This species is common and widely distributed at higher elevations throughout the Rocky Mountains and North Cascades. It is most common in wet subalpine meadows.

This species is found throughout British Columbia, the Washington Cascade Range, and in the mountains of Idaho and western Montana. It does not occur in Oregon.

Arctia plantaginis has a Holarctic distribution and occurs across Eurasia. In North America it occurs from southern and central Alaska across the boreal continent to western Quebec. Its range extends south in the Rocky Mountains to southern New Mexico. A disjunct population is found in the high Sierra Nevada of California.

The larva is a generalist feeding on various herbaceous plants.

Adults fly during the day. They occur during summer from early June to mid August