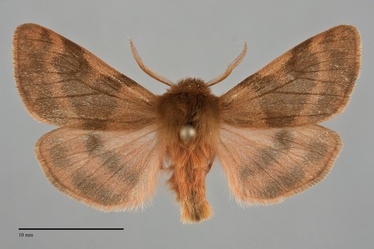 Chelis beanii is a medium-sized (FW length 16–17 mm), reddish-brown moth from subalpine habitats in the northern Rocky Mountain region. The forewing ground color is smoky medium to dark rose. It is traversed by very wide darker rosy brown-gray lines, usually fused into a broad "V" in the center of the forewing and forming a continuous band or series of irregular patches near the outer margin. The hindwing is lighter clear to smoky rose pink, marked by darker rosy gray discal spot, median line, complete or patchy marginal band, and part of the fringe. The head and thorax are the same color as the forewing lines, and the abdomen is similar to the hindwing ground color. The bipectinate antennae are light rosy brown with darker gray pectinations.

This species is unlikely to be confused with any other moth from its habitat. It resembles Phragmatobia assimilans in general coloration and size, but this species lacks the broad forewing lines and hindwing medial band of C. beanii.

This species is found in near timberline at high elevations in the Rocky Mountains. It is most common slightly below tree line in open forest, subalpine meadows, and parkland.

This species has a relatively restricted range in the Rocky Mountains. It is most common in Alberta and British Columbia as far north as the 54th parallel. It is also known from the Beartooth Plateau region of southern Montana.

No information is presently available for this species regarding larval foodplants, but it probably feeds on general herbaceous vegetation like related species.

Chelis beanii flies from mid July until mid August. It is nocturnal and comes to lights.