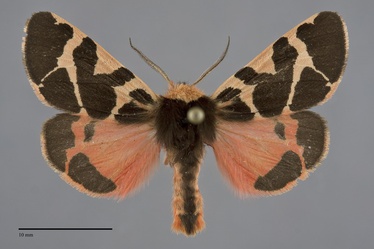 Chelis brucei is a spectacular, medium-sized (FW length 16–17 mm) tiger moth from alpine habitats. The forewing ground color is cream to light pink, although the pattern is dominated by broad dark gray, nearly black, transverse lines. These form two patches in the basal area, an irregular "V" in the central forewing, and two irregular patches near the outer margin. The hindwing is medium pinkish red, with a dark gray discal spot and irregular interrupted marginal band. The head and thorax are nearly black with a contrasting cream to pink collar. The abdomen is similar in color to the hindwings with a black dorsal stripe. The bipectinate antennae are cream to pink dorsally with darker gray pectinations.

No other species are likely to be confused with this moth in its alpine habitat.

This species occurs in alpine to subalpine meadows at high elevations in the Rocky Mountains and North Cascades.

Chelis brucei is found in the north Cascade Mountains, southern British Columbia Coast Range, and the mountains of Vancouver Island  in the Pacific Northwest. The most southerly records are from the vicinity of Lake Chelan, Chelan County, Washington.

This species has a disjunct distribution. Outside the Pacific Northwest it occurs in the Rocky Mountains of Colorado and Wyoming.

Two late instar larvae were found in mid June on silky phacelia (Phacelia sericea) in the Hydrophyllaceae above timberline at Slate Peak, Okanogan County Washington by Lars Crabo. They were reared to maturity on dandelion (Taraxacum officinale) in the Asteraceae and eclosed in July. This species is probably a general feeder on herbaceous vegetation like related species.

Adults fly from early July until early August. They are nocturnal and come to light.