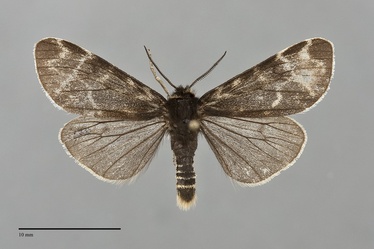 Chelis sordida is, as its name suggests, a drably colored tiger moth. It is medium-sized (FW length 15–16 mm), dark gray with pale yellowish forewing lines, and flies in the high Rocky Mountains during the summer. The forewing is charcoal-gray, traversed by irregular cream or dull ochre lines that produce a fishnet pattern on the outer third of the wing. The postmedial line is smoothly curved and traverses the width of the wing. Pale scaling along the veins is limited to the wing base, greatest on 1A+2A. The wing margin, including the fringe, is off-white. The hindwing is mostly dark smoky gray with darker veins and discal spot, but the fringe is off-white and some individuals show paler areas at the base of the marginal band. The body is mostly black, with yellow off-white on the top of the head, the edge of the collar and tegulae, and at the end of each abdominal segment. The weakly bipectinate antenna is black.

Other alpine tiger moths are more colorful or show larger amounts of white than C. sordida. Males of Apantesis elongata and Apantesis quenseli have are black and white. Both of these species have more extensive pale veins than C. sordida, including prominent longitudinal pattern elements.

Chelis sordida is prized by collectors despite its drab color because of its rarity and inaccessible habitat.

This species occurs in the Canadian Rocky Mountains. Most specimens in collections are from Alberta. It has been collected near the border with Alberta in southeastern British Columbia as well as on Pink Mountain north of Ft. St. John.

The relationship of Rocky Mountain Chelis populations to others in Yukon Territory and Alaska is still under investigation (B. C. Schmidt, pers. comm.). The global range of C. sordida might be restricted to the mountains of Alberta and British Columbia, or it might also occur further north depending on the outcome of these studies.

No information is presently available for this species.

Adults are diurnal, preferring to fly in late afternoon and evening. They are strong flyers and can be difficult to net. Most records are from July to mid-August.