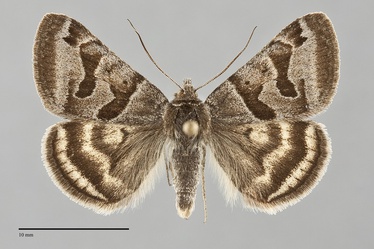 Caenurgina annexa is a small Caenurgina species (FW length 12 - 15 mm) found in high elevation meadows. It has broad triangular wings with blue gray to brown-gray ground color. The posterior antemedial, median, and postmedial lines are fused forming a looping marking that is filled with dark gray. A black wedge precedes the subterminal line near the apex. The orbicular spot is a black dot, and the large reniform is filled with the ground color and is open posteriorly. The hindwing is dull light yellow with dark brown-gray discal spot and thick postmedial line, submarginal band, and fringe. The basal portion is heavily suffused with gray in some individuals. The head and thorax are dark gray with a lighter gray tip to the collar. The male antenna is ciliate, and that of the female is simple.

This species can be identified by its small size and dark gray markings on the forewing and hindwing. It is most likely to be confused with Caenurgina crassiuscula which also occurs at elevation in the mountains of southern British Columbia north. It is less heavily marked than C. annexa and lacks a dark discal spot on the dorsal hindwing.

This species occurs in mountain meadows at high elevations in both the Cascades and Rocky Mountains.

Caenurgina annexa is found in southern British Columbia east of the Okanagan region. In Washington it is found at high elevations east of the Cascade crest, including in the northern and southeastern part of the state. It has been collected in the Blue Mountains of Oregon.

This species occurs in the Cascade Mountains and in the Rocky Mountains as far north as west-central Alberta.

No information is presently available regarding larval foodplants for this species, but it probably uses herbaceous legumes (Fabaceae) like other species of this genus.

Adults are strictly diurnal. They are on the wing in spring and summer, with Pacific Northwest records from late April until mid July.