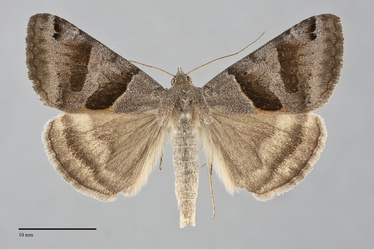 Caenurgina erechtea is our largest and most common member of the genus. It is a medium-sized moth (FW length 14 -23 mm) with the small specimens from the spring and larger ones in the summer. Males and females have similar patterns but different colors and strength of the dark markings. Looping markings on the forewing are formed by the partially fused antemedial, median, and postmedial lines and reniform spot. The ground color of males is medium dark blue-gray with a darker gray terminal area, and the area encompassed by the fused lines is usually brownish black. The reniform spot is inconspicous despite being large because it is filled with the ground color and its posterior portion is broadly fused to an area with similar color. Partially fused black spots precede the subterminal line near the apex. The orbicular spot is a small dark gray dot. The females are reddish brown and have darker red-brown in the areas that are dark gray or black in the males. The hindwings are light grayish yellow in males and darker and more orange in females. Those of both sexes lack discal spots but are suffused with gray scales and banded with gray postmedial, submarginal, and terminal lines. The head and thorax match the forewing ground color in both sexes. The antenna is ciliate in males and simple in females.

This species is closely similar to Caenurgina crassiuscula in appearance and can be reliably sorted only by examining the structure of the genitalia. The differences in the shape of the male valves can be observed by removing the scales with a brush and viewing under moderate magnification. The dorsal distal valve of C. erechtea appears to have a long pointed projection whereas that of C. crassiuscula is bluntly rounded without a dorsal projection. In practice, only specimens in the area where both species occur in northern Washington, Idaho, and British Columbia need to be examined in this way since only C. erechtea is found in the remainder of our region.

This species is common to abundant and widely distributed in moist open habitats throughout North America.  In the Pacific Northwest, it occurs in moist grasslands, meadows, agricultural fields, and urban areas at low to high elevations both east and west of the Cascades.  It is often extremely abundant in clover fields.

Caenurgina erechtea is common throughout our area to southern British Columbia.

This species is widespread throughout a large portion of temperate North America except the far north, the extreme south, or deserts.

The adults are at least double-brooded. A spring flight of small individuals peaks in late April and early May. The summer flight is longer, lasting from early June through September. Most records are from July. This species is both diurnal and nocturnal. Both sexes come to lights.