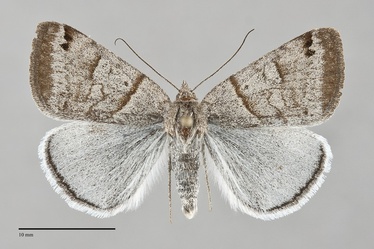 Caenurgina caerulea is a distinctive, light blue-gray, day-flying moth from the western part of the Pacific Northwest. It is small to medium-sized (FW length 13 - 16 mm) with fairly broad forewings. The forewings are light blue-gray with faint brownish gray terminal area, lines, and spots. As in other members of the genus the posterior portions of the antemedial, median, and postmedial lines are fused. A series of black spots precede the apical subterminal line; this line is nearly obsolete elsewhere. The orbicular spot is a gray dark dot. The reniform spot is a large oval, faint except the for the lateral portion and open posteriorly, and filled with the ground color. The hindwings are bluish white with a black terminal line at the base of the fringe. The postmedial band is usually absent, partially evident as a gray wedge-shaped mark in some individuals. The head and thorax match the forewing ground color and the abdomen is similar to the hindwings. The male antenna is ciliate and that of the female is simple.

This species can be identified by its broad light bluish wings with fused lines and apical black spots. It is the only Pacific Northwest moth with light bluish hindwings.

This species is sporadic but locally common in open mountain meadows and disturbed clear-cuts in forests on the west slope of the Cascades and Coast Range.

Caenurgina caerulea is found in the western parts of Oregon, and Washington.

This species is also found in California.

This species is a foodplant specialist feeding on peas (Lathyrus spp.) and vetches (Vicia spp.) in the Fabaceae.

Adults are exclusively diurnal and superficially resemble blue butterflies in flight. They are on the wing in the spring, with Pacific Northwest records from late April through May.