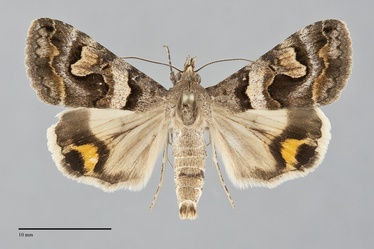 Bulia deducta is a very rare migrant in the Pacific Northwest. It is a medium-sized species (FW length 16 mm). The forewing is medium gray with a variable complex pattern of light gray, black, and red-brown. The most prominent marks are a pale transverse area between the antemedial and medial lines, and a similar pale area between the reniform spot and the postmedial line which is ballooned laterally like the margin of a giant reniform spot. The distinctive hindwing is pale yellowish white, with a dark gray marginal band that envelops an orange and black eyespot and white fringe.

This species can be identified from similar Drasteria species by the unique orange and black mark at the hindwing margin.

This species is common and widely distributed across the southern United States in open, dry habitats.  It only occurs in the Pacific Northwest as a long-distance stray.

This species has been found at Dayton in Columbia County, Washington. It is a migrant and has no known breeding populations in our area.

The is a Neotropical species which range extends to the southern United States, usually not ranging further north than Colorado.

This species is a foodplant specialist feeding on woody shrubs and trees of the family Fabaceae including mesquite (Prosopis sp.).

The single Washington record is from late July. This species is nocturnal and comes to lights, although Powell and Opler (2009) report that the moth is often flushed during the day in areas where it is more common..