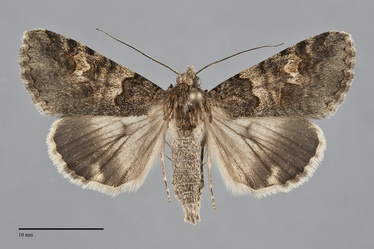 Drasteria sabulosa is a variable dull-colored Drasteria. It is medium-sized (FW length 18 - 21 mm). The forewing ground color is quite variable, usually blue-gray to brown-gray, or brown. The color of the areas defined by the antemedial and postmedial lines are often different; typically the forewing base is dark, the median area is light gray or gray-brown, and the distal area is blue-gray. All the transverse lines are present, with the most prominent being the dark-filled double antemedial and postmedial lines. The median line is usually double, but variable in strength. The subterminal line is most evident at the costa where it is preceded by long black wedges. The reniform spot is crescent-shaped. The postmedial loop lateral to the reniform is undulating in shape, without sharply jagged projections. The hindwings are dull, light gray-brown with a slight coppery sheen. The veins and discal spot are gray, as is the wide marginal band. A spot of the ground color is located at the base of the fringe near the anal angle. The head and thorax are speckled brown. The male antenna is ciliate white that of the female is simple.

Drasteria sabulosa is found from southern British Columbia south through Washington, Idaho, and Oregon west of the Cascade Crest. It is most common in dry forest but also occurs in steppe habitats near riparian zones.

This is a western North American species. The limits of the range are poorly known at this time.

This species appears to be a foodplant specialist feeding on willows (Salix spp.) in the Salicaceae.

Drasteria sabulosa has a long flight season. It has been collected from late April to September in our area, although it is most common in mid summer with most records from July and August. It is nocturnal and comes to light.