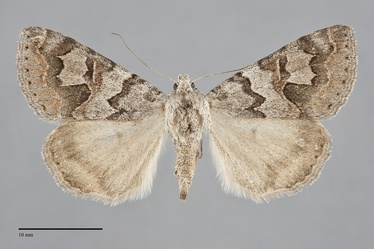 Drasteria scrupulosa is a moderately large gray Drasteria (FW length 18 - 21 mm) that lacks a colorful hindwing. The forewing is light gray, with variable darker brown gray near the reniform and distal to the postmedial line. Like most Drasteria species, the postmedial line is displaced toward the forewing margin near the reniform spot. This part of the line has two outwardly directed "teeth" in this species. The filling of the double antemedial line and reniform spot are dark brownish gray, and a small black spot is located medial to the subterminal line near the apex. The hindwing is pale slightly brownish white with dirty gray discal spot, veins, and incomplete marginal band. The head and thorax are gray. The antenna is finely ciliate in males and simple in females.

This species resemble Drasteria sabulosa, a much more common and widespread species in our region. Drasteria scrupulosa is slightly larger, less mottled and lighter gray than this species. The postmedial line is undulating near the reniform spot in D. sabulosa without the pointed teeth of D. scrupulosa.

This species is distributed through the Southwest and southern Great Basin on open sagebrush steppe.  It barely enters into the southern portion of the Pacific Northwest.

Drasteria scrupulosa has only been found in Klamath County, Oregon in our region.

This is a species of the southwestern United States.

California specimens have been collected in July and August. The adults are nocturnal and come to light.