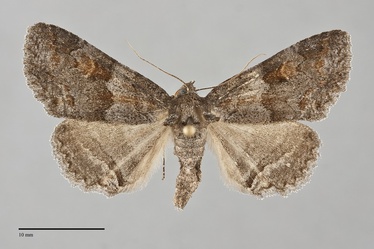 Zale duplicata is a variable, mottled blue-gray, red-brown, and black species found in association with lodgepole pine (Pinus contorta). It is medium-sized (FW length 18 - 20 mm) with scalloped wing margins. The ground color is dusty blue-gray to brown-gray, usually lighter basal to the median line and near the outer margin. There are variable red-brown patches on the forewing, always present around the reniform spot but also commonly over other portions of the wing. The lines are variable from faint gray to dark charcoal gray. The median line is well-developed, as are the postmedian and the subterminal lines. The latter two are toothed laterally at the mid wing. The reniform spot is a dark crescent, filled with and followed laterally by red-brown. The hindwing is lighter gray-brown with a slight yellow tint. It is finely lined and has a very weak discal spot. The subterminal line is strong, especially near the anal margin. The posterior thorax is tufted, strongest laterally at the tegulae. The antennae are simple.

This species can be differentiated from other Zale species by its mottled appearance with red-brown at the reniform spot. Other species are more finely striped and lack red-brown color on the forewing.

This species is widely distributed across Canada, extending southward through the Rocky Mountains and Cascades in high elevation coniferous forests with lodgepole pine.  In the Oregon Cascades, such pine forests dominate on volcanic pumice and ash soils.

Zale duplicata is found across southern British Columbia and northern Washington but has a spotty distribution. In Washington it is most common in the northeastern tier of counties, but occurs south in the Cascades at least to Yakima County. An isolated population is found at near the top of Orcas Island in the Gulf of Georgia. In Oregon this species appears to be restricted to the eastern portion of the Blue Mountains, but occurs in the Cascades south to Klamath County.

This species' range spans the continent. In the east it is found from southern Canada to New York. Its range extends south in the Rocky Mountains.

This species is a foodplant specialist feeding on pines (Pinus spp.) in the Pinaceae, and appears to favor lodgepole pine (P. contorta) in the Pacific Northwest.

Zale duplicata is on the wing from late April to July. It is single brooded. The adults are nocturnal and come to lights.