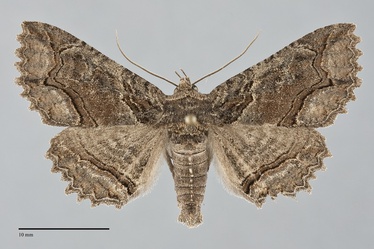 Zale rubi is a medium-sized Zale (FW length 18 - 20 mm) with gray-brown transversely streaked wings with strongly scalloped edges. Some individuals are slightly darker brown; the terminal area and hindwing are lighter in these specimens. The strength of the transverse streaking is also variable, with some specimens relatively smooth in the median area. The antemedial line is strongly obliqued toward the base from the costal margin. The postmedial line is smooth, with two lateral bulges near the reniform spot. The subterminal line is strongly toothed toward the outer margin, with an adjacent dark transverse bar in the terminal area that reaches the margin. The reniform spot is a black open crescent filled with the ground color and lacking adjacent yellow or red color. The hindwing is similar to the forewing in color, with an irregular wavy subterminal line that is double and filled with brown. The thorax is dark brown, with strong posterior tufting. The antennae are simple, finely ciliate in males and simple in females.

This species is closest in appearance to Zale termina, with which it is sympatric in southwestern Oregon. Z. termina is slightly smaller and darker, purplish gray-brown with dark red-brown markings. It has light ochre distal to the reniform spot that is lacking in Z. rubi, and its hindwing subterminal line is smoother.

This species is widely distributed in western North America. It appears to favor warm, dry climates east of the Cascades.  It occurs in riparian zones along creeks, rivers, and canyons at low elevations.

Zale rubi is mostly restricted to dry steppe regions of our area as far north as southern Washington. It also occurs in southwestern Oregon.

This species is found in the American West.

This species appears to be a foodplant specialist feeding on willows (Salix spp.) in the Salicaceae.

Adults have a fairly long flight season. Most records are from late spring and early summer, but it has also been collected in August raising the possibility of a partial second brood. It is nocturnal and comes to light.