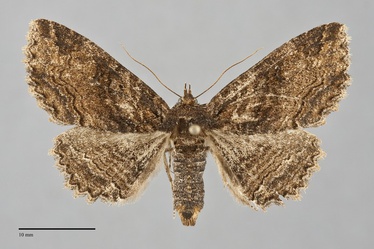 Zale minerea is a variable brown Zale that resembles a small Zale lunata. It is slightly smaller (FW length 19 -22 mm) with scalloped wing margins. The ground color is one of several shades of brown, usually a rich warm shade, but occasional specimens are dull brown or have all but the costa in the central wing yellow- to orange-brown. All forms have a darker costa and multiple wavy transverse lines. A form with white and gray, appearing gray-green, or gray scales abutting the antemedial line and forming two patches in the terminal area is most common in the Northwest, but some individuals lack all such color. The antemedial line runs obliquely toward the base from the costa and has a notch at the cubital vein. The postmedial and subterminal lines are very close to each other and nearly parallel. Both form a rounded lateral projection adjacent to the lower end of the cell. The orbicular spot is a small brown dot. The reniform spot is an open crescent filled with the ground color, surrounded by a few white scales in specimens with large amounts of white elsewhere on the forewing. The hindwing is similar in color and pattern to the forewing, with basal and marginal white or gray patches in individuals with such markings on the forewing. The subterminal line is irregular and is slightly concave toward the wing base over most of its length. The brown thorax is deeply tufted posteriorly. The antenna is simple, finely ciliate in males.

This species is most similar to Zale lunata. Most specimens of this species are larger and duller brown. They can be differentiated by the shape of the lateral bulge of the black postmedial line at the lower end of the cell near vein M3. This is a single convex line in Z. minerea and distinctly bilobed in Z. lunata.

This species is common and widely distributed in moist forest habitats throughout much of North America.  In the Pacific Northwest, it is often particularly abundant in coastal rainforests of the Coast Range and Cascades, but is also common in mixed hardwood-conifer forests at lower elevations west of the Cascades and in the Rocky Mountain region.

Zale minerea is widespread in forests in the Pacific Northwest, including west of the Cascade crest. It has been found as far north as Lillooet and Salmon Arm in British Columbia, but occurs further north in Alberta suggesting that this limit in our area might reflect paucity of early season collecting in the northern Province.

This species is widespread in North America. It occurs widely in the East from Nova Scotia to Florida.

This species is a generalist feeding on a wide variety of hardwood trees and shrubs including Betulaceae, Rosaceae, Ericaceae, Aceraceae, and Salicaceae.

This species is single brooded in the Pacific Northwest and is on the wing in spring and early summer. Our records span from mid April to August, with most specimens from May. It is nocturnal and comes to lights.