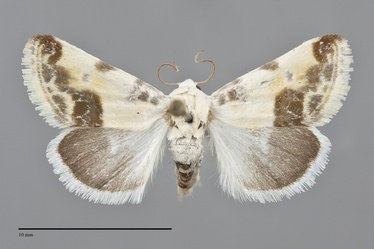 Acontia coquillettii is a small (FW length 9 - 10 mm) pure white moth that has been collected near the Snake River in eastern Oregon. It has mottled gray and olive markings on the distal forewing and a gray hindwing with a pale fringe. The only forewing markings medial to the postmedial line are olive marks on the costa at the antemedial and median lines. The distal wing is marked with gray and olive. The darkest and largest gray patches are near the anal angle along the trailing margin and at the apex. Olive patches are present medial to the pale subterminal line and at the outer margin between the gray marks. All spots are absent. The hindwing is dark gray. The fringes of both wings are white. The head and thorax are white. The male antenna is filiform.

This species can be identified by its white forewing with gray and olive patches near the outer margin and absence of ordinary spots in combination with a dark hindwing. The only similar species in our area, Acontia cretata which has been collected in south-eastern Idaho, has a pale hindwing base, is purer white on the forewing, and is slightly larger.

No information is presently available regarding habitats of this species. It likely occurs in dry sage steppe.

This species has only been found in Malheur County, Oregon, not far from the Snake River. It should be sought elsewhere in southeastern Oregon and southwestern Idaho.

Acontia coquillettii appears to be restricted to California south of our borders.

No information is presently available regarding larval foodplants of this species, but it probably feeds on Malvaceae like related species.

This species has been collected in June and August in our region. It is nocturnal and comes to lights.