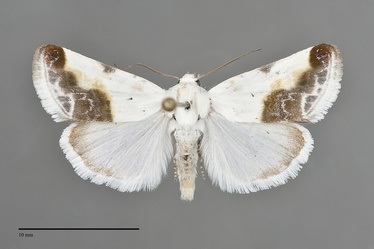 Acontia cretata is a small (FW length 11 - 13 mm), pure white moth that flies in southern Idaho in the Northwest. It has gray spots on the costa and mottled olive, gray, and light blue-gray on the distal forewwing in combination with a nearly white hindwing. The anterior basal area is blue-gray in some specimens, similar to spots on the costa at the positions of the antemedial and median lines. The area between the median line and postmedial line is olive from near the reniform spot to the trailing margin, the subterminal area is brown-gray at the costa and gray elsewhere, and the terminal area is brown at the apex and light blue-gray elsewhere. The irregular white postmedial and subterminal lines are visible against the dark adjacent areas. The fringe is pure white except near the apex where it is blue-gray. The spots are absent, although the lower part of the white reniform spot is evident in the olive color in the distal median area in a few individuals. The hindwing is shiny white with dark gray suffusion near the margin, with a pure white fringe. The head and thorax are pure white. The male antenna is filiform.

This species is most likely to be confused with Acontia coquillettii, a rare species that has been found in Malheur County in eastern Oregon in our area. Compared to A. coquillettii, A. cretata is slightly larger, has purer white forewings, and has a whiter hindwing. Acontia cretata is also similar to Ponometia binocula but this species has a gray-filled circular reniform spot that is lacking in our Acontia species.

This species has been found at the steppe-juniper ecotone in the Central Basin and Range Ecoregion of southeastern Idaho. It is common in desert scrub further south.

This species has only been found in southeastern Idaho near the town of Snowville, Utah. It might be more widespread in southern Idaho and southeastern Oregon than this single record suggests.

Acontia cretata is found predominantly in the Southwest United States and adjacent Mexico. It occurs from southern California to southern Texas and as far north as northern Colorado and southern Idaho. An isolated record from southeastern Saskatchewan is shown in Poole (nearctica.com).

The early stages are unknown. The larval foodplant is most likely a species in the family Malvaceae based on the foodplants of many other species in the subfamily Acontiinae.

Adults fly during the summer and have been collected in late August in our area. They occur throughout the spring and summer months to the south in Arizona. This species is nocturnal and come to lights.